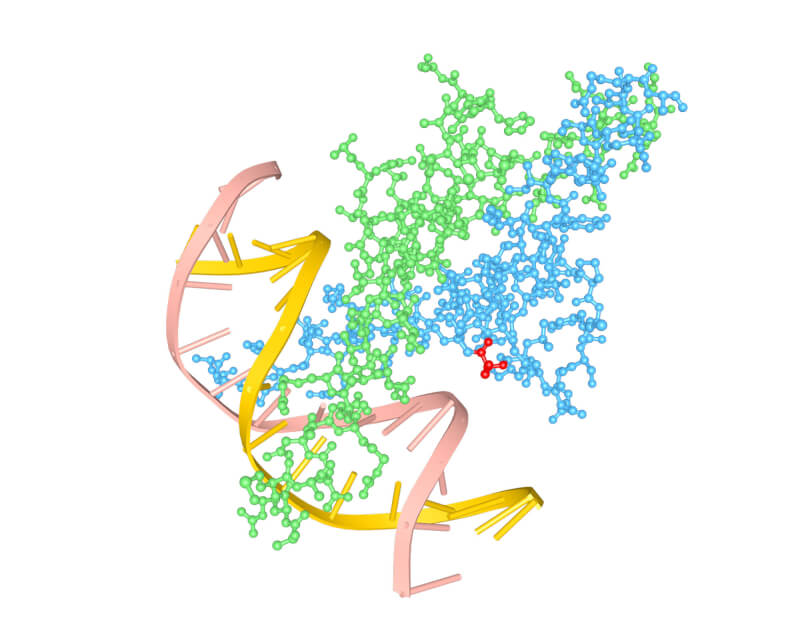 A predicted model of PM-Nato3 (blue) interacting with it's binding partner (green) on the DNA double helix.
Image Credit: Courtesy of Merritt DeLano-Taylor

The main targets of neuronal loss in Parkinson’s disease are dopamine neurons, and this research project will test if the introduction of a modified protein, known as PM-Nato3, will protect those neurons from the toxicity of the disease.

The patent-pending technology that will be used in the research was developed by Grand Valley alumni Nicholas Huisingh, Jordan Straight, Daniel Doyle and Douglas Peterson while they were undergraduate students.

Merritt DeLano-Taylor, associate professor of biomedical sciences, will serve as one of three principal investigators for the research. His partners include Van Andel Research Institute’s Patrik Brundin and Rush University’s Jeffery Kordower, both of whom Taylor described as “giants in the field of Parkinson’s disease.”

The research DeLano-Taylor’s team will conduct proposes that delivering PM-Nato3 into the affected area of the brain of a person with Parkinson’s disease will activate certain factors that will protect dopamine neurons. To test that hypothesis, the team will use human cells and animal models to define the effects of PM-Nato3.

“PM-Nato3 can drive the expression of many factors that have been shown to protect dopamine neurons from disease,” said DeLano-Taylor. “It may be a useful tool because instead of relying on a single factor to protect the neurons, we may be able to activate an armada of these factors, increasing the likelihood of survival and therapeutic benefit.”

DeLano-Taylor said his team hopes that the results will indicate potential for the technology to be translated into a product that meets the needs of researchers and clinicians.

“Ultimately, we hope to provide a real therapeutic tool that can help people because in the United States, the cost of these diseases is in excess of $25 billion per year — the human cost is obviously much greater,” said DeLano-Taylor.

DeLano-Taylor said that a special component of this work meets the “double bottom line” of his research lab at Grand Valley — ask interesting questions and engage students.

“Those core directives, followed with careful practice of the scientific method, will lead to personal and vocational discovery for the students and scientific discovery for the field of neuroscience,” said DeLano-Taylor. “There is no better way to learn than by doing, and Grand Valley is special because our students do this kind of work every day.”