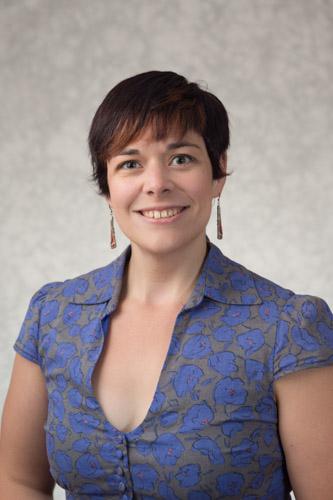 Cara Ocobock, assistant professor of biomedical sciences, is among a team of researchers for Race Across the USA.

In mid-January, a team of a dozen marathoners left California with a goal to run across the country to raise awareness of childhood obesity and money for school fitness programs. They plan to complete the 3,080-mile trek in June.

They are being closely followed by a team of researchers that include Cara Ocobock, assistant professor of biomedical sciences.

Ocobock joined Grand Valley’s faculty last year after earning a doctoral degree in anthropology from Washington University in St. Louis. She was asked to join the research team by a colleague from Purdue University who is among the runners.

“This is such an extreme activity and something like this has never been measured before,” Ocobock said. “How could I say ‘no’ to that?”

As an energetics specialist, Ocobock is researching the number of calories each participant expends and how many calories they are consuming. She met with the runners January 13 in Huntington Beach, California, for a base set of measurements; she will meet them in Texas in March and at the end of the race in June.

Ocobock said this research will help aid anthropological theories about the evolution of endurance running.

To learn more about Race Across the USA, click here.