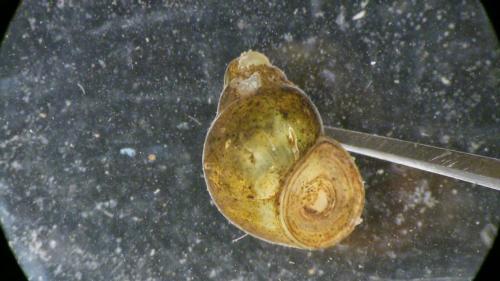 Researchers from Grand Valley State University’s Annis Water Resources Institute, along with researchers from nine other universities working in partnership with the U.S. Environmental Protection Agency and the Great Lakes Restoration Initiative, have found invasive faucet snails in many new locations throughout the Great Lakes basin over a three-year period. The snails carry parasites that are deadly to native waterfowl, including ducks and coots.

The new locations where the faucet snails have been found show that they have invaded many more areas along the Great Lakes coastline than experts realized.

Researchers said the spread of the small European snails is bad news for waterfowl, as they are known to carry intestinal flukes that kill ducks and coots.

“Our finding highlights the importance of ecological monitoring, especially at a large spatial scale, and making those results publicly available so that decision makers have good information when implementing management strategies,” said Carl Ruetz, a professor at the Annis Water Resources Institute and collaborator on the Great Lakes coastal wetlands monitoring project.

The small snail, 12-15 mm (approximately 0.5 inch) in height at full size, is brown to black in color with a distinctive whorl of concentric circles on the shell opening cover that looks like tree rings. The tiny size of young snails means they are easily transported and spread, and they are difficult to kill.

According to the Minnesota Department of Natural Resources, the faucet snail carries three intestinal trematodes that cause mortality in ducks and coots. When waterfowl consume the infected snails, the adult trematodes attack the internal organs, causing lesions and hemorrhage. Infected birds appear lethargic and have difficulty diving and flying before eventually dying.

Although the primary purpose of the Great Lakes Restoration Initiative is to assess how Great Lakes coastal wetlands are faring, detecting invasive species and their spread is one of the secondary benefits. The scientific team expects to report soon on the spread of non-native fish, and has helped to locate and combat invasive aquatic plants.

“Coastal wetlands provide numerous ecosystem services, yet are critically threatened,” said Alan Steinman, director of the Annis Water Resources Institute, and a collaborator on the project. “This is another example of how our natural systems are constantly at risk, and why it is so important to remain vigilant, as is being done through this basin-wide monitoring effort.”