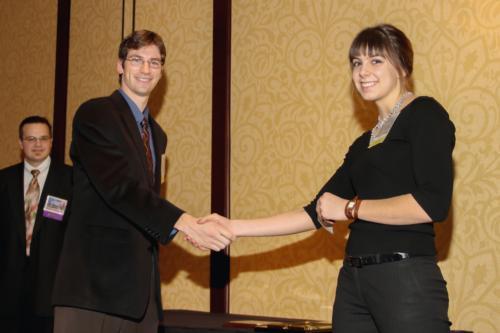 Grimm’s presentation focused on the ability of an aquatic plant called the hybrid watermilfoil to reproduce, which she has been studying with researcher Ryan Thum at Grand Valley’s Annis Water Resources Institute in Muskegon.

“Though it may seem like a very simple question, interspecific hybrids are often sterile due to the many genetic differences between the two parental species,” Grimm said.

Studying the ability of the hybrid plants to reproduce is important because the hybrid varieties of the plants often display more invasive characteristics than either of the parent plants, including reduced response to herbicides and faster growth rates, she said.

“Understanding if they are able to pass on resistant traits to their offspring could give some insight into treatment practices,” Grimm said.

Grimm’s win at the annual meeting came against several other students, all of whom were graduate students at other universities.

“I was pretty apprehensive about how my presentation would be received by people who are so experienced with hybrids,” Grimm said, “but seeing how well it was received really made graduate school seem less intimidating, and was a significant confidence boost.”

Grimm plans to keep working on watermilfoil research throughout the summer and fall, and has applied for a graduate program at Grand Valley. She hopes to conduct breeding studies to try and get a better grasp of how invasive traits are passed on and to try and find potential patterns.

“Working in a research lab really helped solidify the concepts I’ve been learning in class, and it was a tremendous personal growth experience,” Grimm said.