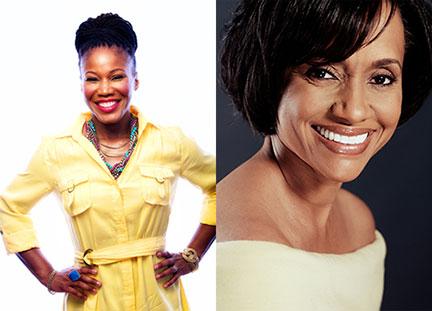 Hatchett’s speech on January 21 helps usher in a new era at Grand Valley. Since there are no classes that day, more students, faculty and staff members will be able to participate in events, according to planning committee organizers.

Hatchett is a former judge who is known in the legal community for her groundbreaking courtroom style. She is also respected for her work with children and considered a leader in the justice system.

She serves as national spokesperson for Court Appointed Special Advocates, a nonprofit organization that trains volunteers to represent abused and neglected children and help them navigate the court system. She urges viewers of her syndicated TV show, “Judge Hatchett,” to become mentors to at-risk youth.

Carter, who will speak on January 24, is as well-known for her urban revitalization efforts as she is for her radio show, “This Promised Land,” which airs on National Public Radio. She founded Sustainable South Bronx in 2001 when few were talking about sustainability, and even fewer people were talking about it in places like the South Bronx.

By 2003, Carter coined the term “Green The Ghetto,” as she pioneered one of the nation’s first urban green-collar job training and placement systems, and spearheaded legislation that fueled demand for those jobs. Carter’s 2006 TEDtalk was one of six presentations to launch that groundbreaking website.

Kathleen Underwood, co-chair of the MLK Executive Planning Committee, said along with Hatchett’s presentation on January 21, the day’s other events include social justice activities, a community lunch and the silent march on campus. Most events will be in the Kirkhof Center, which will allow participants to move easily from one event to another.

Social justice activities planned include a poverty simulation, film screenings relevant to King’s work, panel discussion and “upcycling,” in which participants will engage in creating crafts such as sleeping mats or dresses that will be donated to nonprofit organizations.

Grand Valley will award its first Community Service Award during King Commemoration Week, recognizing an individual or organization that best portrays the spirit of King’s teachings and examples.

Nominations for this award are now being accepted; details are online at www.gvsu.edu/mlk.

The week’s events conclude on January 26 with a Day of Service, coordinated by the Community Service Learning Center.

Grand Valley to honor 'I Have a Dream' 50th anniversary

Inclusion Implementation Plan will fold into next strategic plan