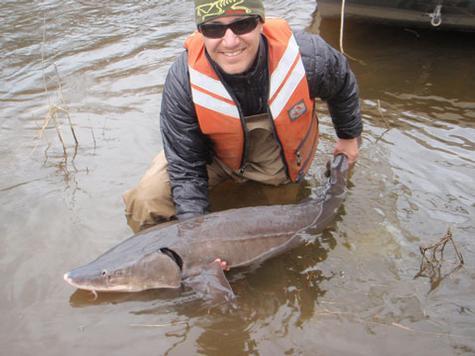 Researchers from Grand Valley State University's Annis Water Resources Institute have been awarded a $50,000 one-year grant from the Match-E-Be-Nash-She-Wish Band of Pottawatomi Indians, the Gun Lake Tribe, to study lake sturgeon in the Kalamazoo River.

The study will focus on population genetics, archeological remains, and ecology in hopes of better understanding the species. The sturgeon, which can grow to be more than six feet long and weigh more than 100 pounds, carries special cultural significance with the tribe.

Liz Binoniemi-Smith, environmental director for the tribe, said the fish is significant because tribe members have been connected to the Kalamazoo River and the regional plants and animals for many centuries, including spearing the sturgeon for food when it was more plentiful in the river.

AWRI researchers Carl Ruetz and Ryan Thum said the study of the sturgeon population is important because the species is threatened statewide, and very few fishing locations remain. The large fish don’t spawn every year, meaning restoration of the population is a challenge that will take decades.

Ruetz and Thum will study population genetics by comparing tissue samples of sturgeon from the Kalamazoo River to those collected from the Muskegon River. They hope to see if the fish return to the same streams they were born in, versus returning to other rivers. The information they discover could help fishery biologists from state and federal agencies better manage lake sturgeon populations.

The research team will also attempt to extract DNA from old fossil remains of sturgeon from the river to track genetic changes to the species over time, including the notable loss of scute, or bony plates on the body of the fish.

If possible, a third aspect of the study will focus on ecology and the behavior of the fish. Ruetz and Thum will try to catch and tag several juvenile fish in the Kalamazoo River, and will use the data from the tracking devices to study fish behavior, habitat, and a history of how the fish moves between rivers and lakes.

The research project will be a joint effort between Grand Valley, the Gun Lake Tribe, and the Michigan Department of Natural Resources.

Thum and Ruetz hope their research will add to the existing collection of information that’s available about the fish, making it easier and more accurate for other scientists to identify specific genetic details about the other sturgeon being studied in the Great Lakes.