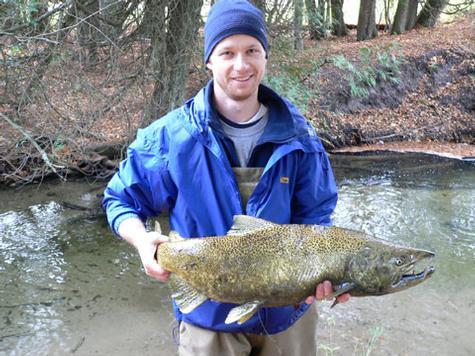 A link between pollutant levels in stream-resident fish and stocked Pacific salmon in Lake Michigan has been described by a researcher at Grand Valley State University.

David Janetski, a postdoctoral researcher with the university’s Annis Water Resources Institute in Muskegon, said he has found a link between spawning salmon and elevated levels of pollutants in fish that normally live in tributaries to Lake Michigan. Those pollutants include PCBs; DDE, a chemical byproduct of DDT; and PBDE, a chemical that’s classified as toxic by the EPA. It is often used as a flame retardant in textiles and furniture.

Janetski’s research revealed that pollutant levels in fish residing in Lake Michigan tributaries where the stocked salmon travel to spawn are, on average, about 30 times higher than in stream reaches where the salmon don’t travel.

“Certain pollutants bioaccumulate in predator fish such as salmon, so when they migrate into streams to spawn and die, they leave those pollutants behind in the stream,” Janetski said. “These include PCBs and other organic pollutants.” He also said pollutants may be transferred to smaller fish, including brook trout, when they eat the eggs the salmon lay in the streams during spawning season.

While the salmon do seem to be bringing pollutants further upstream, Janetski said it’s not clear what the impact of higher pollutant levels would be on human health. Some of the levels in the streams without salmon were barely detectable, so a 30-fold increase doesn’t necessarily mean terribly polluted resident fish.

“If background levels in these streams are at a certain amount and salmon come in and raise that 30 times, I think that’s important in terms of understanding the dispersal and distribution of pollutants in the Great Lakes basin,” Janetski said. “We’ve found that salmon runs can be very important (to pollutant distribution) in certain situations.”

Janetski said the study doesn’t mean salmon shouldn’t be stocked in the Great Lakes any more, but if people are concerned about pollutant dispersal, it’s worth noting that salmon are certainly a factor.

The Pacific salmon that are transporting the pollutants from Lake Michigan to tributary areas are not native fish. Chinook and Coho salmon, native to the Pacific Northwest, have been regularly stocked in the Great Lakes since the late 1960s. The salmon help control alewife populations and are an extremely valuable species for commercial and recreational fishermen alike.

Janetski said the fish grow up and mature in the lakes and instinctively swim upstream to spawn. The fish do this in large numbers, which transports nutrients and pollutants from open water into streams.

The project is a joint collaboration between AWRI and the University of Notre Dame, where Janetski just finished his doctorate in aquatic ecology.