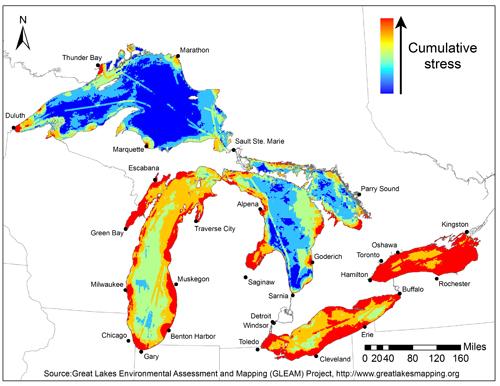 Extensive research produced this stress map of the Great Lakes

A comprehensive map three years in the making is telling the story of humans’ impact on the Great Lakes, identifying how “environmental stressors” stretching from Minnesota to Ontario are shaping the future of an ecosystem that contains 20 percent of the world’s fresh water.

In an article published online December 17 in the Proceedings of the National Academy of Sciences, a group led by researchers at the University of Michigan, including Grand Valley State University’s Annis Water Resources Director Alan Steinman, reports on an expansive and detailed effort to map and cross-compare environmental stresses and the ecological services provided by the five lakes.

"Being a core member of the Great Lakes Environmental Assessment and Mapping (GLEAM) project was intellectually rewarding and challenging," said Alan Steinman, director of GVSU’s Annis Water Resources Institute, and co-author on the PNAS article. "We recognized at the outset the potential value of having a comprehensive map of Great Lakes threats and ecological services, but it was a very difficult process to obtain and vet the data, identify the appropriate analytical tools, synthesize the incredible volumes of data, and finally present the information in a concise and intuitive way.  Even the publication process in PNAS was a bit tortuous, but I believe the outcome was worth the effort. Although it was a team effort, I give a tremendous amount of credit to the lead members of the team from the University of Michigan, who did the heavy lifting on this project.”

Their efforts have produced the most comprehensive map to date of Great Lakes’ stressors, and also the first map to explicitly account for all major types of stressors on the lakes in a quantitative way.

“Despite clear societal dependence on the Great Lakes, their condition continues to be degraded by numerous environmental stressors,” said David Allan, the project’s lead researcher and a professor of aquatic sciences at the University of Michigan’s School of Natural Resources and Environment. The map gives federal and regional officials an unprecedented scientific foundation upon which to sustainably manage the Great Lakes, the researchers conclude.

The map represents the combined influence of nearly three dozen individual stressors and is incredibly detailed for a region spanning nearly 900 miles, showing impacts at the scale of half a mile, researchers say. Thirty-four stressors were examined, including coastal development, pollutants transported by rivers from agricultural and urban land, fishing pressure, climate change, invasive species and toxic chemicals (the full list is at http://www.greatlakesmapping.org).

To rank the relative importance of different stressors to ecosystem health, the team surveyed 161 researchers and natural resource managers from across the basin. Combining the mapping of multiple stressors with their ranking by experts to assess ecosystem health is an emerging new approach.

Their work found high and low “stress” – defined as human impacts like physical, chemical or biological disruptions that potentially have adverse effects on people, plants and animals – in all five lakes. Ecosystem stress is highest closer to shores, but also extends offshore in some areas.  Large sub-regions of moderate to high cumulative stress were found in lakes Erie and Ontario as well as in Saginaw and Green bays, and along Lake Michigan’s shorelines. In contrast, extensive offshore areas of lakes Superior and Huron, where the coasts are less populated and developed, experience relatively low stress.

The Great Lakes provide a host of human benefits, termed ecosystem services, ranging from recreational and commercial fishing to boating, beach use and birding, with economic values estimated in the tens of billions of dollars annually. Comparing maps of ecosystem services to maps of stress, the researchers found that locations providing human benefits often were disproportionately stressed.

A key goal of the effort was to help lawmakers and natural resource managers better plan Great Lakes-area investments, such as those under the Great Lakes Restoration Initiative, a federal effort initiated in 2009 that is funding hundreds of projects at sites where ecosystem stress is very high. The initiative is the largest investment in the Great Lakes in two decades. Eleven federal agencies developed an action plan to implement the initiative through 2014.

The researchers launched a new website (http://www.greatlakesmapping.org) to share their results with policymakers, planners and government officials in the region. The project will continue acquiring data to map stressors currently not included and will regularly update the stress maps.

The Great Lakes Environmental Assessment and Mapping project began in 2009 with $500,000 from the Bloomfield Hills, Mich.-based Fred A. and Barbara M. Erb Family Foundation.