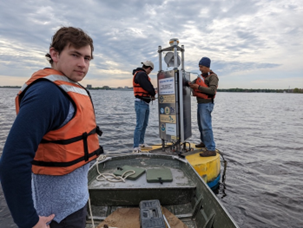 Nate’s thesis examined the annually recurring bottom water hypoxia (low levels of oxygen) within Muskegon Lake, a Great Lakes Area of Concern. His study had two objectives: 1) examine the interannual trends in bottom water hypoxia from 2011-2021 and 2) insights on the year 2021, a warm, wet, and productive year within Muskegon Lake. A hypoxic severity index was developed to determine years that had more severe hypoxia than others. 2012 and 2021 were the most severely hypoxic years whereas 2015 and 2019 were the mildest hypoxic years. There was no discernible trend in whether hypoxia was getting more severe within Muskegon Lake during the 11-year time period due to high variability between years. However, years with warmer temperatures and more precipitation in the spring and early summer resulted in more severe hypoxia. Similarly, years with cooler temperatures and less precipitation during the spring and early summer resulted in milder hypoxic conditions. He concludes that the environmental conditions prior to the onset of hypoxia play a vital role in determining the potential severity of hypoxia for any particular year. For example, the year 2021 was warm and rainy in the spring and early summer, and hypoxia was maintained throughout the summer resulting in a severe hypoxic zone. A dissolved oxygen drawdown experiment suggested that organic matter inputs from the Muskegon River contributed more to hypoxia in the spring and sinking surface production contributed more in the summer. Internal phosphorus loading due to hypoxia was detected late into 2021 and led to a historically late harmful algal bloom that lasted into November.

After submitting his final thesis documents, Nate plans to continue to work in the Biddanda Lab while submitting his two thesis chapters for publication in journals. He will then pursue a job in the field of aquatic science.


Page last modified October 10, 2022
Report a problem with this page