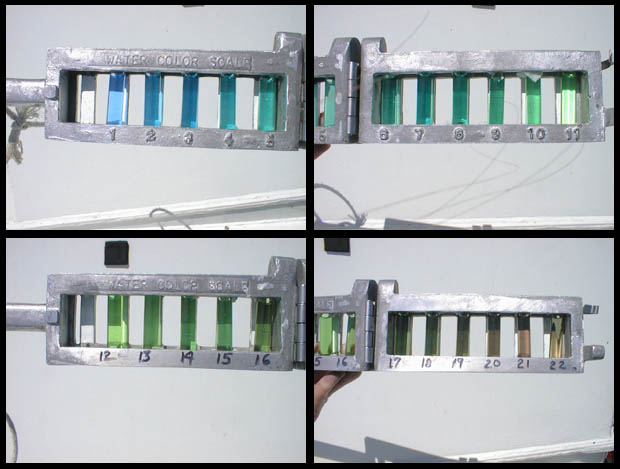 What influences the color of the water?

The description of the color of a body of water varies from one person to the next. Many variables affect our perception of its color. Among them are sky conditions, time of day, surface conditions, suspended materials, and the direction from which the water is viewed.

Sky conditions include the presence or lack of clouds. Water viewed on a clear sunny day will appear blue unless there is a sufficient quantity of suspended or dissolved material in the water to affect its color. When the same water is observed on a cloudy day it will look gray. If there is a large amount of water vapor or dust in the air, the color of the water will be affected because both the quantity and quality of the light will be changed.

A flat water surface viewed with reflected light can appear to be without color while the same water will take on a color if the surface is covered by waves. If the waves are large and foam from white caps is present, the apparent color of the water can be affected by light passing through the waves.

What is the Forel-Ule color scale?

The glass tubes are mounted in a metal frame to protect them from damage. Each frame of vials has a loop that should be placed over the wrist so that it will not drop overboard. A determination of water color is made by lowering the Secchi disk from the shady side of the vessel into the water to a depth of one meter. The observer then compares the color of the standard samples in the tubes to the color of the water as seen against the white portion of the Secchi disk.

The apparent color of the water as determined by the above technique is very subjective. Two observers viewing the same water can disagree within one or two numbers. However, if the same technique is used each time color is to be determined, usable data can be obtained.

NOTE: The Forel-Ule colors are contained in glass vials that are subject to being easily broken. Care should be taken when they are used to guard against breakage. This is why it is important that the ropes should be placed over the wrist to prevent dropping the equipment overboard.

What is the significance of the color of the water?

The color of a body of water can give an indication of its quality. Color can be associated with material dissolved or suspended within it. The altitude of the sun, water vapor in the air, clouds, and dust also relate to water color. Deep blue may indicate low amounts of organic matter or plankton. Green shades are associated with phytoplankton and high biological productivity. Brown is indicative of mineral matter or large populations of diatoms. Open sea water color is blue to blue-green, inshore water and inland lakes are often yellow-green, and water in rivers and harbors tends to be brown or brown-green. Colloidal calcium carbonate scatters green and blue light, and it is linked to the whiting of portions of Lake Michigan.

The water in Muskegon Lake is coffee colored because of the breakdown of natural organic matter in the wetlands. This matter includes tannins, lignins, and humic acids that are a result of decay of plants and wood.

The suspended material in the water flowing from a river into Lake Michigan provides an excellent contrast where the effect of the suspended material on the color of water is easily seen. The interface between the river and lake waters can be very sharp if the wind and resulting waves are not present. The color of the river is almost coffee-like while the lake is a clear blue-green. The Grand River contains organic matter in addition to suspended clay materials. Turbidity measurements can help differentiate between dissolved and suspended materials that color the water.


Page last modified May 28, 2020
Report a problem with this page