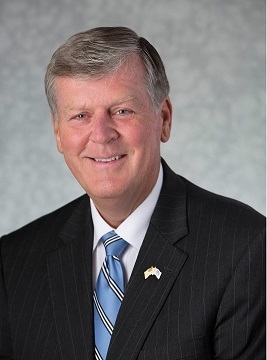 President Emeritus Thomas J. Haas will be inducted into the Michigan Military and Veterans Hall of Honor November 19. A ceremony will be held for 2021 inductees at the Michigan History Museum in Lansing. Haas was selected because of his longtime service in the Coast Guard and his leadership at Grand Valley, said Bill MacDhubhain, MMVHOH board member.

Haas is an internationally recognized expert in hazardous material transportation, strategic planning and higher education leadership. He worked with the United Nations to establish protocols for the safe shipment of cargos in and out of U.S. and international ports. His expertise in chemistry and hazmat cleanup resulted in being detailed as part of the Coast Guard team that responded to the Exxon Valdez oil spill. He retired from the Coast Guard in 1996 but returned to the academy as a civilian for a five-year appointment as chief academic officer.

Haas served as Grand Valley’s fourth president from 2006-2019; he led the university through a steady period of managed growth and success. Under his leadership, the Health Campus and engineering programs were expanded and the Detroit Center was opened. Haas also helped position Grand Valley as a leader in sustainability, with silver, gold and platinum designations for buildings.

Grand Valley consistently receives national attention for its commitment to veterans. With the establishment of the GVSU Veteran Promise, Grand Valley became the first university in the country to guarantee enrollment to high school seniors who serve in the military.

Return to the listing of member spotlights.


Page last modified October 18, 2021
Report a problem with this page