Courage, Compassion and Uyghur Noodles: My Semester in Chengdu 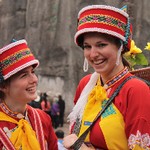 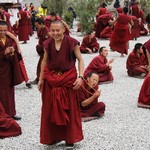 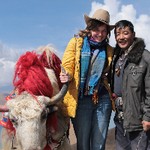 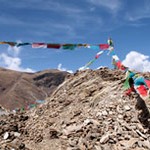 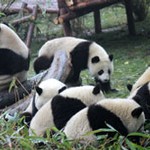 Courage, Compassion and Uyghur Noodles: My Semester in Chengdu

In preparation for this article I looked over some of my writings while I was abroad.  What I wrote about my experiences in Chengdu, China is that studying abroad and not knowing the language is like swimming.  The bits of Mandarin I learned to speak were like breaking the water’s surface and breathing air.  Yet experiencing the culture while not know the language was like having an aqua lung.  I was able to experience the water, swim, see, and survive, but I was not able to breach the surface between water and air.  As a wildly talkative (and notorious eavesdropper) this challenged me to use the language of my demeanor rather than the language that resides in my interactive vocabulary.

When first arriving in Chengdu all I could feel was chaotic motion.  Because I did not understand the patterns of traffic, I assumed there was not a pattern and it was sheer grace of God that people were not crashing into each other left and right.  However, after residing in China for a longer period of time, I began to learn the patterns.  Things that made no sense to me when I was in my American mindset gradually began to sense.  Not only did the patterns of social interaction begin to make sense, but I also began to automatically follow the patterns myself.  There is no greater feeling of accomplishment that I have experienced in my short life, than being able to recognize patterns and not even think about it.

The ways I have personally changed because of my study abroad experience are harder to determine than I though before leaving.  I was under the impression that I would be able to color code the changes in myself.  Or even that I would be able to sense and record these changes as I experienced them.  One of the reasons I was so excited to travel abroad was to experience change. It takes a lot of courage to board a plane, destined for unknown lands. It takes a lot of courage (or stupidity) to leave behind a perfectly agreeable life and venture into a place without knowing a single person. I recall thinking, 'what if everyone in my program is just plain weird?' Then I reminded myself that I should be thinking: 'What if everyone in my program realizes I am just plain weird.' But seriously, I was excited to change when I went to China and come back a new and improved version of myself. But now that I am here I realize that it is not change experienced; it is more like the solidifying self.

In a country full of voices I did understand (unless they are counting from one to ten or saying 'foreigner', 'hello', or 'I'm sorry, my Chinese is not good') there is a certain amount of quiet in one's own mind. In a place where I looked, acted, talked, and thought differently than everyone else; where my habits were unlike the habits of everyone around me; and where what is polite is totally different from what than what I was used to are used to- there is a lot of confusion. And in the face of confusion I think it is only natural to curl into a fetal position emotionally and live out the essence of actual self because who I am is going to be different from those around me no matter what. I think the change I underwent in China was the loss of the ability to put up a front even less than I could before.

Something I miss a lot from my adventure is having a friend to find adventure with.  One of the most difficult variables to find success while studying abroad is finding a perfect travel partner.  I was blessed with spectacular travel partner who ended up becoming a sister to me.  In a land where siblings are few and far between, friends are encouraged to become like family to one another.  I think this rubbed off on Dorothy and I, because by the end of the trip we bickered enjoyably with each other, as two sisters tend to do.  But having her with me in all of my travels opened doors that would not have been opened otherwise.  We traveled by boat, bus, or plane every weekend and had more adventures than I could have possibly fathomed before leaving Grand Rapids, Michigan.  With her I experienced China: the unedited version.  And learned that perhaps it is best not to edit my own heart when it calls for some compassion, courage, or Uyghur noodles.