Living the Life of a Stanley Cup Champion 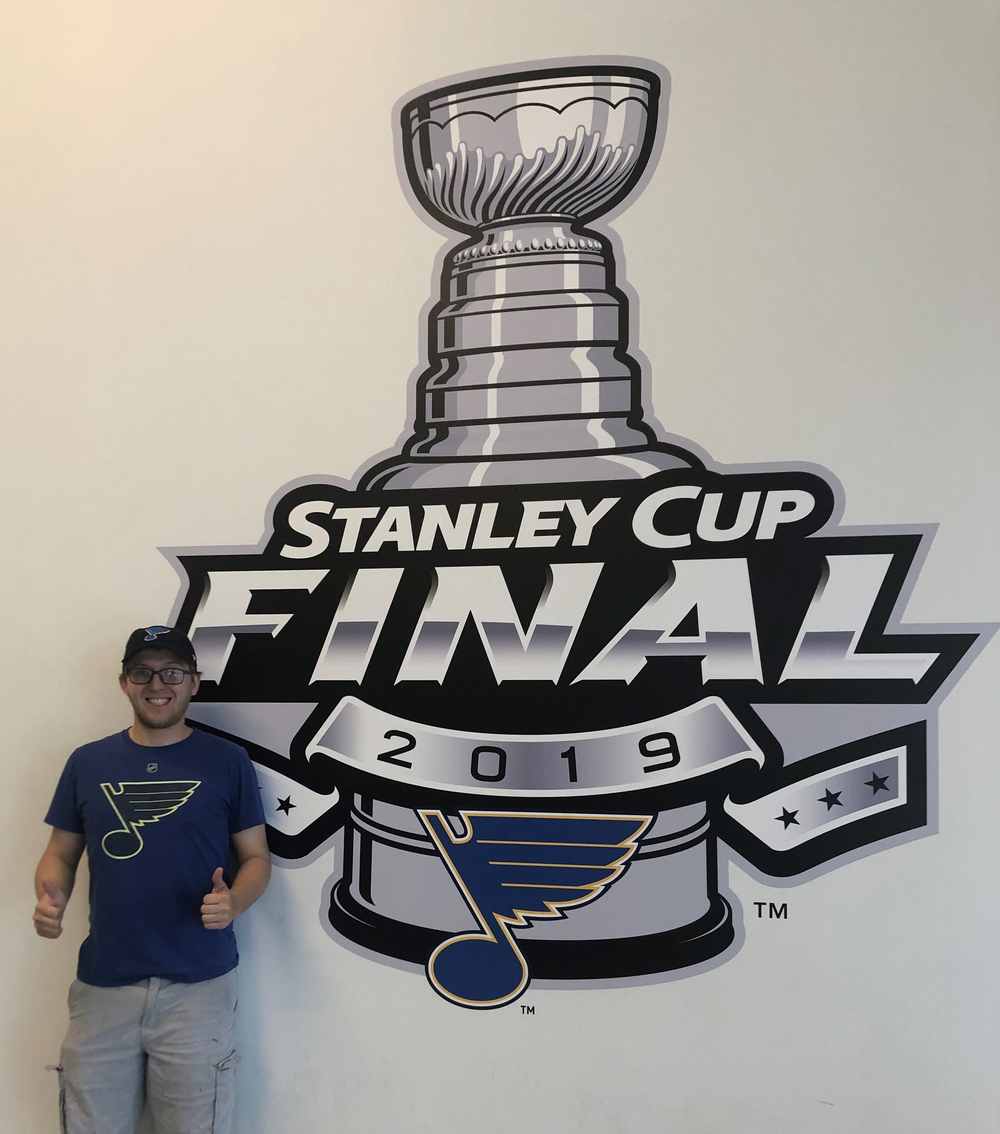 There are many challenges associated with moving out of state for the first time. Learning new traffic laws, trying to navigate the city and finding the best ways to avoid crowds of people are some of these challenges. Now, add the atmosphere of the Stanley Cup Finals and the pressure is turned up to a whole new level! I received the opportunity to leave Western Michigan and move to St. Louis, Missouri to be a Box Office Intern with the St. Louis Blues in the midst of their 2019 Stanley Cup Finals run.

Throughout the summer, I will be tasked with assisting the Blues ticket operations department with various tasks such as filling internal/external ticket requests, archiving paperwork from events at Enterprise Center and providing box office event supervision/ticket resolution for shows hosted by the Blues this summer.

Before these responsibilities would begin, I had the opportunity to experience game 6 and eventually game 7 of the 2019 Stanley Cup Finals inside the home arena of the Blues, the Enterprise Center, where the Blues would eventually be crowned champions routing the Boston Bruins 4-1.

The idea of working a Stanley Cup Final game is still a surreal concept to me. My week in paradise began early on Sunday June 9th, the day of game 6. I was invited to begin my internship on the wake of the most monumental day in the Blues 52 year history. Fans were paying an average of over $2500 a seat for this game, and I got to experience it for free. I can still feel the anxiety of trying to enter the Enterprise Center for the very first time in the midst of all the security, league and arena staff. Quickly I found my supervisor and received a full tour of the arena, front office and box office before the game. This included being able to glance at the Blues team during their morning warm-ups on ice before anyone other fans had arrived. Then, the waiting began. The office was silent most the afternoon as Blues staff were nervous to see if their hometown team could clinch their first ever Stanley Cup.

Doors to the event opened at 5:30 p.m., and fans entered by the thousands to wait for their team to take the ice. I was able to participate in the box office operations, observing how the box office staff handled ticket resolution questions for fans that were eager to get inside. I experienced the famed Blues “pump-up” entrance sequence from the stands with over 18,500 Blues fans in attendance, an experience I will never forget. When the box office closed, I was invited to the suite level to watch the rest of the game from a Blue employee suite! Unfortunately, the Blues fell short in game 6 and while many people left sad that night, it opened a new opportunity for me, game 7.

Game 7 took place on Wednesday, June 12th at TD Garden in Boston. Although the Blues were not the home team for this game, the city of St. Louis rallied together to support their team. Tickets were sold for a watch party at the Enterprise center, which sold within one hour of being posted.  The Blues staff coordinated with Busch Stadium, home of the St. Louis Cardinals, were they sold an additional 28,000 seats to fans to be able to come and watch the game on the video boards.

For this game, I was able to watch its entirety from one of the Club areas inside the Enterprise Center. Being a game 7, it was winner takes all and the fans knew that their Blues were only one win away from hockey history. With stakes being so high, there was energy in the arena like I have never experienced at a sporting event before. The only way to describe it, electric! Every single hit, pass, and shot of goal lead to either a collective excitement for Blues success or a loud, audible gasp when the Bruins made a crucial play. This was all culminated into an explosion of excitement when the Blues scored first late in the first period. Throughout the rest of the game, the crowd’s energy kept increasing as the Blues kept scoring against Boston. Late in the third period, St. Louis held a 4-1 lead against Boston, and it became clear to fans that, after 52 years, they would be Stanley Cup Champions! For the final five minutes of the game, there was not a single person in the arena who was not standing and screaming. When the final horn finally blew, the arena, and city, erupted into the Blues patented victory song, “Gloria!”

The viewing party hit a sentimental moment as the team was awarded the Stanley Cup. Fans, young and old alike, were found cheering and crying that their team had finally reached this ultimate victory. The party did not stop inside, exiting the arena to go home, there were thousands of fans singing, dancing and celebrating in the streets for their Stanley Cup Champions.

The party continued into the following Saturday as the team returned home for the Stanley Cup Championship parade. Over 800,000 fans lined the streets of downtown St. Louis to celebrate. It was a special moment being able to actually walk in the parade with the Blues staff an experience the celebration from the inside.

Now that the celebrations are beginning to wind down, I am excited to roll back my sleeves and dive into work here with the Blues for the duration of my internship. This opportunity has been so unreal and unlike anything else I have ever experienced, and I am so grateful for the Blues organization for letting me be a small part of this historic ride.

If I could offer any advice to other students, it would be to never be afraid to take risks, and to follow your dreams! When applying for this internship, I was unsure if I should apply because I felt there was no way I could be selected. In the end, I decided to apply, and I know I would have so much regret if I was not able to be experience this. I have had a passion for hockey my entire life, and it is has always been my dream to somehow experience the Stanley Cup Finals. This opportunity is more than I could have ever dreamed of and I believe it shows that if you work hard enough, eventually your dreams will come true!


Page last modified June 24, 2019
Report a problem with this page