LAKERS TOGETHER: View the university’s COVID-19 response, including plans for returning to campus for Winter 2021. Also, be sure to complete the online daily self-assessment.

Bard Beyond Borders is a special 25th anniversary project of the 2018-2019 Grand Valley Shakespeare Festival. Theatre artists from two different international festivals/companies will travel to Grand Valley to perform in the Linn Maxwell Keller Black Box Theatre. The artists will also provide workshops and public and class discussions and presentations along with their special performances. 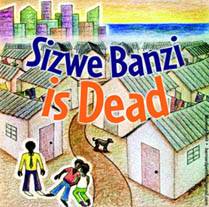 Direct from Nassau, The Bahamas

Athol Fugard’s Sizwe Banzi Is Dead, one of the most critically acclaimed productions presented in The Bahamas, was originally a featured part of the 2014 Shakespeare in Paradise Theatre Festival. This production reunites the director and his original cast members for a limited engagement as part of the Grand Valley Shakespeare Festival’s 25th Anniversary Season.

Written and set in apartheid era South Africa, Sizwe Bansi Is Dead confronts the struggles faced by people of color during the time and tethers them to broader questions of identity and human worth. Set in a photography studio, the plot follows a man who comes in to have his photograph taken

Reviews of the Original Bahamian Production

“GO SEE THIS AMAZING PLAY.... I was in awe at the work of the director, Philip Burrows and Actors, Dion Johnson and Mark Humes... So worth seeing.”

“I saw this last night, and I LOVED it. The performances by Dion Johnson and Mark Humes were excellent under direction by Philip Burrows.”


Page last modified April 25, 2019
Report a problem with this page