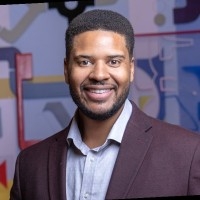 While at GVSU Selma was a Cook Leadership Fellow at the Hauenstein Center for Presidential Studies and a member of Omicron Delta Kappa, as well as Pi Alpha Alpha, the public administration honor society. Selma was also chosen to attend an academic seminar with Washington Center, where he was able to witness Obama’s inauguration.

“It was an amazing experience. It’s a moment I’ll be able to share with my children and my grandchildren.”

Selma’s career began in 2009 where he worked for the city of Grand Rapids as a Project Coordinator and then a Contract Administrator and Regional Coordinator. In 2013, Selma became the Vice President of Public Sector Consultants in Lansing, Mi, which works to enhance the quality of life for Michigan residents through public policy.

In 2020, Selma began his current position as Director of Strategic Communications for the Michigan Municipal League, a nonprofit association that utilizes public policy to further strengthen Michigan communities.