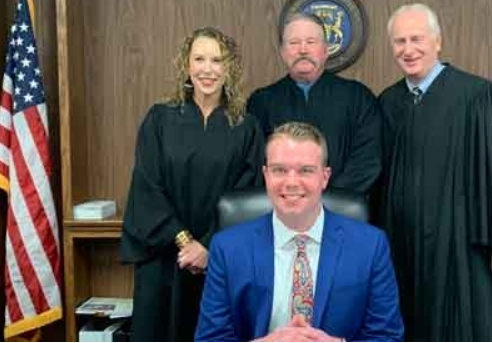 Jay Fleming majored in political science at Grand Valley and graduated from the MSU College of Law under the joint GVSU-MSU Legal Education Admission Program (LEAP). As an undergraduate at GVSU, Jay was the Vice President of Finance for the GVSU Law Society and was a long snapper for the football team.

He participated in the GV in DC program in conjunction with The Washington Center where he served as a public policy intern for Iraq and Afghanistan Veterans of America. He also interned in a county prosecutor’s office in Michigan. Under the LEAP program, Jay completed his GVSU requirements in three years of study.

Jay clerked for Judge Michael Riordan on the Michigan Court of Appeals, as well as Judge John McBain in Jackson County. On November 6, 2020 he was sworn in as an attorney in the former Jackson County courtroom of his grandfather, James G. Fleming.


Page last modified November 20, 2020
Report a problem with this page