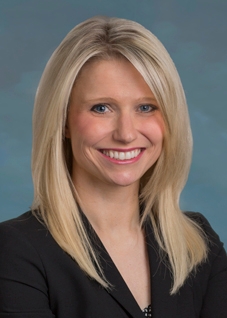 Lyndsey Kathryn Kitson graduated from GVSU in 2009 with a major in Political Science and a minor in Philosophy.

Currently, I am an attorney at Sullivan, Ward, Asher, and Patton, P.C. in Southfield, Michigan, where I specialize in ERISA Law. More specifically, I provide employee benefit, labor, and employment law advice to municipal retirement and health systems, multiemployer fringe benefit funds, trade associations, and other businesses. I blend my practice between Taft-Hartley fund representation, ERISA litigation, and ERISA and IRC Compliance. In addition to appearing in state and federal court, I have represented clients before the Ontario Labour Relations Board in Toronto, Ontario, Canada.

I accepted my position with Sullivan, Ward in April of 2012, and was notified that I passed the Michigan Bar Exam in November of 2012. As a young associate, I have been fortunate enough to gain hands-on experience that many others do not typically get. For instance, I have conducted several depositions, worked up several cases from beginning to end, argued motions, and have gone to trial all within my first year as a practicing attorney.

Additionally, throughout undergrad and law school, I volunteered as a Big Sister with Big Brothers Big Sisters.  Since 2005, I have been coaching the Clarkston High School Mock Trial Team - a very successful and bright group of young people who continually surprise me with their intellect, wit, confidence, and maturity. The program allows students to take on the roles of attorneys and witnesses, and compete against each other in courtrooms in front of actual judges and lawyers. I am also very active in the sport of CrossFit.

There are several choices along the way that led me to the position I am in today. Choosing to attend GVSU was one of those choices. It was there that I found professors who took the time to get to know me, not as a name in their classroom, but as a person. Whether it be Professor Richards counting on me for the lone conservative opinion in his con law classes which often sparked a lengthy and, at times, boisterous debate or Professor King letting me vent in her office about what classes to take, where to go to law school, or the boyfriend I just broke up with, I felt at home. I never once felt stifled. I felt motivated and empowered. This was an environment that allowed me to thrive, work hard, and really learn. GVSU pushed me, which prepared me for what was to come after graduation. The presentations, the endless papers, and the constant debate over political positions allowed me to succeed in law school, at my job, and in life. I learned how to write effectively, speak articulately, and disagree without being disagreeable, all of which are necessary tools in my job. I am truly thankful for everything GVSU gave me and the foundation that the political science department provided.