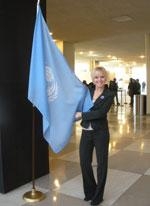 Kirsten Zeiter's passion for social and gender justice was taken to the international level when she was chosen as a delegate for the Commission on the Status of Women meetings held at the United Nations.

"I enjoyed learning about women and gender equality from an international perspective," said Zeiter, a senior women and gender studies and political science major. "I take a holistically focused perspective to women's issues, and I like to understand how different forms of power and oppression intersect, and incorporate my feminist viewpoint into politics as much as possible."

The CSW is committed to gender equality and improving global conditions for women; meetings are held annually to discuss how these goals can be forwarded internationally. Zeiter attended the first week of meetings in late February in New York City.  Thousands of women affiliated with non-governmental organizations attended, allowing Zeiter the opportunity to network with women from around the world. She was even able to discuss technology at is relates to sex trafficking with Melanne Verveer, the ambassador-at-large for Global Women's Issues.

Zeiter served as a delegate for the Women's International League for Peace and Freedom, contributing to official documentation of both official and informal meetings. "I helped draft proposed changes to the Agreed Conclusions, which constitute the culminating legislation that comes out of the CSW," said Zeiter. "Our proposed changes were given to several members of the U.S. delegation, and many of the changes we advocated for can be seen in the finalized document that was passed by the United Nations CSW as a whole."

She said these documents are pertinent to the politics within many countries. "It remains critical to address larger issues, but also what can be done right now," said Zeiter. "What is accomplished at the meeting gives some countries their only political leg to stand on, where they can take what we documented and enact it into their country."

Zeiter is very active within the campus community. She has served on the Student Senate Diversity Affairs Committee for three years, was the special projects chair for the Vagina Monologues, is president of the Women and Gender Studies Honor Society, Iota Iota Iota, and also plays trumpet in the GVSU marching band. Upon graduation in April, Zeiter will join the Peace Corps in sub-Saharan Africa.