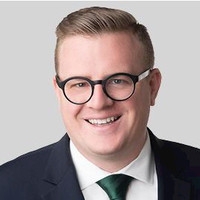 Tyler Nickerson, a double major in political science and public and nonprofit administration while at GVSU (B.S. 2010), has recently been appointed First Vice President of Commercial Banking at Amalgamated Bank. Based in Washington, D.C., Tyler will lead the bank’s commercial banking and strategy for its foundation and philanthropic clients.

Prior to joining Amalgamated, Tyler served as the founding director of investments and state strategy at The Solutions Project, a philanthropic and cultural campaigning initiative sparked by Leonardo DiCaprio, Mark Ruffalo, and others working to accelerate the transition toward clean energy for all people. Tyler formerly served as a program manager at the Dyer-Ives Foundation and as founder & CEO of Motu Communications, which supported philanthropic clients in public affairs, grant-making strategy, and evaluation. He has also led successful community-based advocacy efforts, including as an affordable housing advocate for the Grand Rapids Area Coalition to End Homelessness. Tyler has consulted on more than two-dozen electoral campaigns.