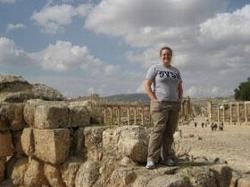 VanderKolk said the greatest challenge will be the immersion aspect of the trip.

“I’m going to try my best not to speak English,” she said. “I’m not very fluent in Arabic, so it’ll be interesting.”

VanderKolk has studied abroad before in Jordan as a part of a summer study abroad. She said her mother was nervous at first when she began to travel, but she came around.

“She knows I’m having fun and that I’ll be careful,” she said. “My friends have all been really supportive, too. Most are planning on coming to visit me.”

VanderKolk said while she has been to Jordan before, she is still nervous because this time she is going by herself.

“I did everything by myself,” she said. “I had to get a flight alone, find my own place to live, and even that may not work out. I may wind up alone in Jordan with nowhere to live. But I’m very excited, too. I’ve lived in West Michigan my whole life. Amman is a beautiful city, and it will broaden my horizons.”

VanderKolk took a class in international relations for her political science major and decided to deepen her focus on Arabic to complement her major.

“I was thinking of after graduation,” she said. “I wanted to work on Arabic. I went Grand Valley’s full two years, and wanted to go somewhere else to do more. It was between Jordan and Egypt, and I chose Jordan.”

VanderKolk hopes to one day work for the State Department, and is applying for an internship there when she returns from Jordan. She also plans to get her masters’ degree in Middle Eastern Studies.

“America right now really needs people who speak Arabic,” she said. “The more we understand it, the better we’ll be.”

For the trip to Jordan, VanderKolk was awarded the Padnos International Scholarship, an award from Grand Valley for up to $10,000.

Professor Majd Al-Mallah has had Andrea in his class many times, from elementary Arabic to an introductory class on the Middle East to Model Arab League. Al-Mallah said VanderKolk also went with him on a summer study abroad trip to Jordan.

“I could tell she was excited every day she was there,” he said. “She attended every class, every field trip; she was an active participant and a positive influence on the rest of the group. She made a lot of connections in Jordan with people, such as staff at the university. She’s done just what she needs to do for her role.”

“I can’t understand why more people don’t do it,” she said. “My top five moments in my life came from when I studied abroad. Especially now that it’s such an international world, it’s important to get out of the American bubble.”