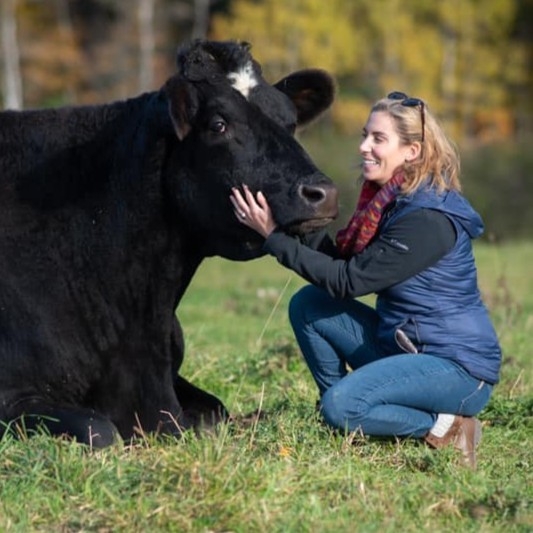 Amanda Fortino graduated from GVSU in 2004 with a major in Political Science and minor in Writing. She is pictured above with some farm animals from Farm Sanctuary, along with a dog she rescued in LA and placed in a loving home.

After graduating from Grand Valley State University, I went on to work as a Legal Assistant at Legal Aid of Western Michigan.  During my time there I was able to work with attorneys who are deeply passionate about their work, and about helping others.  At Legal Aid, the majority of the attorneys I worked with handled mainly family law, including divorces and custody cases for domestic abuse victims. I will forever be thankful to Legal Aid for taking a chance on me right after graduation.  The attorneys, the clients, and all of my colleagues at Legal Aid directed me to be a better person, to help the less fortunate, and to defend others in need.

After working at Legal Aid in Grand Rapids for four years I moved out to California. While job searching, I also decided to volunteer.  I had volunteered at GVSU’s Women’s Center as well as for DHS, and thoroughly enjoyed the time I spent volunteering.  In 2008 when I moved to LA, I learned about a ballot initiative called Proposition 2.  Prop 2 would ensure that calves raised for veal, egg-laying hens and pregnant pigs be confined only in ways that allow these animals to lie down, stand up, fully extend their limbs and turn around freely. Volunteering for Prop 2 quickly consumed my time. I was motivated by speaking with Californians on the importance of passing Prop 2. Through leafleting and volunteering, I began on a path to helping others, just as I had at Legal Aid, but these individuals happened to be animals. Once Prop 2 passed in California, I decided that I wanted to continue working for animals. It was then that I applied to the animal rights organization, People for the Ethical Treatment of Animals (PETA).

While at PETA, I traveled throughout the United States and Canada as a Campaign Coordinator leading protests against cruel and unnecessary animal testing, the use of animals for entertainment with a focus on the abhorrent Ringling Bros. and Barnum & Bailey Circus, the use of animals for clothes such as the horrific fur industry, as well as promoting a vegan diet.  I met dozens of compassionate individuals throughout the world and was fueled to work and volunteer for animals as much as possible.

Outside of work my work with PETA I began volunteering with a group called The Beagle Freedom Project (BFP).  BFP’s mission is to rescue and find homes for beagles used in laboratory research. While volunteering for BFP there was a big rescue in which beagles were being turned over to Beagle Freedom Project from the laboratory that had been conducting vivisection work on the dogs. I was lucky enough to foster a beautiful girl from this rescue, and we named her Frida and brought her into our home. I experienced a number of “firsts” with her, such as walking on grass and sleeping in a soft bed.  It was during my time fostering Frida that I began to realize the importance of providing a loving home and veterinary care to animals who have been abused, neglected, mutilated, and treated as objects. Buoyed by the immense connection I felt to Frida, I began working for a group called Farm Sanctuary, which is where I still am today working in Development as a Major Gifts Officer.

Farm Sanctuary’s mission is to protect farm animals from cruelty, inspire change in the way society views and treats farm animals, and promote compassionate vegan living. I am honored to work for an organization that is not only advocating to change laws to better protect farm animals, as well as educate the public on the cruelty happening to animals on factory farms, but also provides a loving home for rescued farm animals where they can live out their lives in peace and receive veterinary care.

My political science classes at GVSU trained me to weigh both sides of a situation, thoroughly analyze the details, and make an educated case for why I was in support of one side or the other. The process of intensely researching a topic helped me to excel as an advocate and activist. This training was especially helpful during my time at PETA when I was on a TV show discussing animal protection, or partaking in a debate on a radio show with the opposition, or even during general interviews where the person interviewing me might try to change topic. Additionally, GVSU offered many volunteer opportunities, and encouraged students to partake in them. It was at GVSU that I often found myself challenged by participating in a mock trial, or raising my hand to defend the victim in a case study we were studying, or studying abroad in Mexico where the only language allowed in our classrooms was Spanish. GVSU helped me to grow and have an opinion on issues that mattered.  Education was so important, and not only in the classroom, but on current events, foreign issues, and topics that spanned all corners of the globe. Professor Mark Richards especially influenced me to use my voice. I was typically quiet in class and didn’t have a lot of courage to speak in front of others, but Professor Richards’ classes were always fun, educational, and everyone treated others with respect. In his classes students were encouraged to research and defend their side of a case, and it was there that I found I had a voice and I could use it to help others.  I am thankful to GVSU for the education I received, the incredible people I met while at Grand Valley, and for the encouragement to find my passion and run with it.


Page last modified April 30, 2014
Report a problem with this page