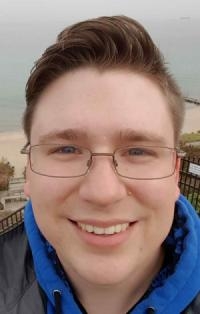 Eric Van Oeveren developed a love for physics starting in high school, which motivated him to study physics at GVSU. His interest in General Relativity led him to complete his senior project with Dr. Brett Bolen on the redshift of photons from Oppenheimer-Snyder collapsing stars embedded in an anti-de Sitter spacetime. This project better prepared him for his work on General Relativity at the University of Wisconsin-Milwaukee, where he attended graduate school, studying neutron star tidal deformability and gravitational self-force. Eric received his PhD in physics in September 2018. He now works for Intuit, where the math and programming skills he learned as a physicist helps him solve problems as a data scientist.

Return to the listing of physics alumni profile.


Page last modified August 9, 2019
Report a problem with this page