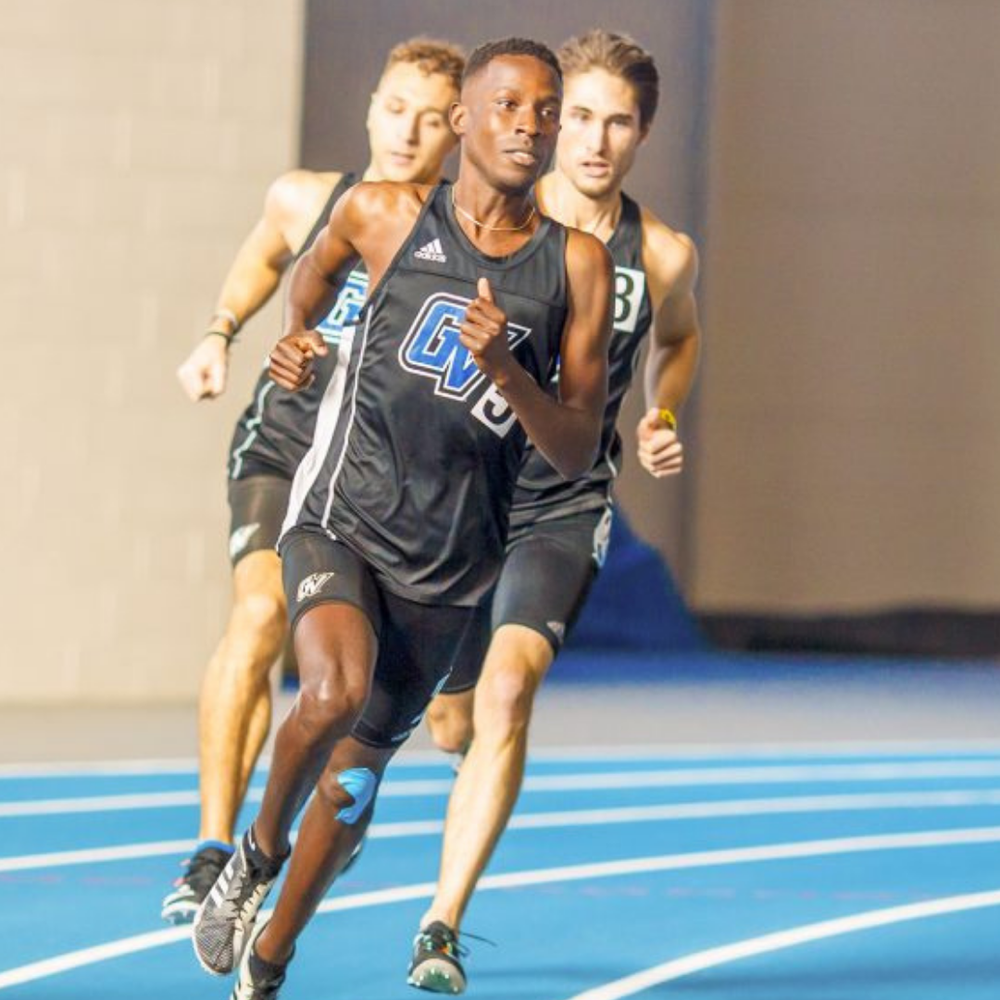 Running cleats on his feet, laptop in his hand, and dressed in a suit and tie is a normal thing for Dennis Mbuta. He is a senior studying Information Systems; and recently is the 800m Men’s Indoor Track & Field National Champion. He won the 800m race with a time of 1:48.62, which makes him a National Champion and a record holder here at GVSU.

Dennis and his family are from Nairobi, Kenya, which is located on the east side of Africa. He moved to Kentwood, Michigan at the start of 6th grade. He said his dad is the most influential person in his life, as he came from Kenya - leaving a culture and country he was comfortable with for a new culture that was uncomfortable; but he still became successful. He said that, “it just shows when you put your mind to something, you can be successful at it”. That mindset pushed him early on in high school at East Kentwood and continues to push him now. He earned All-Academic Honors from 2013-2016 and All-Conference Honors in 2016. He also helped lead East Kentwood to the Conference and Regional Championship in 2016.

At the end of his senior year of high school, he had decided to go to Michigan State University and not be part of the Track & Field team there. Something inside of Dennis told him to take a visit to GVSU in the summer of 2016, where he fell in love with the campus and the opportunities he’d have here. His coach at East Kentwood connected him with Jerry Baltes, GVSU Track & Field Head Coach. Jerry offered him a spot on the team and made Dennis feel like he truly cared about his student-athletes. Dennis decided to not go to MSU, but instead to become a student-athlete at GVSU. Every great athlete sees a point in their life that makes them really fall in love with their sport. Dennis said that, “with running, it is always a love and hate relationship. There are ups and downs during every season but to me, the moment I fell in love with the sport was after my freshmen year”.

Dennis has another passion besides and running and that is computing. He said that, “coming into GVSU, I only knew about computer science. When I spoke to my academic advisor, I told her my passion was business, people, and computers”. That conversation led him to become an Information Systems major, where he can combine all of his passions. About his time studying computing, he said “I have enjoyed being in every class with all of my professors. The way they put in the effort to make sure students are successful shows how much they care”. His favorite computing classes were CIS 163 with Dr. Roger Ferguson and CIS 290 with Dr. Scott Grissom and Dr. Paul Leidig. He felt that, “professionally, CIS 290 opened my eyes and introduced me to the real world. It taught me many ways to make myself more professional and prepared for interviews and communication with companies”. Both Dr. Scott Grissom and Dr. Paul Leidig had nothing but praises for Dennis. Dr. Grissom and Dr. Leidig had this to say about Dennis and his accomplishments:

I admire the way Dennis and other GV athletes manage their practice time and school work. Dennis’s work ethic was clear to me. I enjoyed talking to him before class about upcoming and completed competitions. He had a goal of winning a national championship two years ago–probably longer than that I assume. Way to go Dennis! –Dr. Scott Grissom

Dennis always brought the same energy and professionalism to class that he exhibited in athletics. I expect he will experience the same success in his computing career as he did running. –Dr. Leidig

We asked Dennis a few more questions to better understand him:

2. If you could give advice to yourself when you were in your first year of college, what advice would you give?
Use your resources. Being a student-athlete at GV, there are a lot of resources that you can take advantage of. From tutoring, faculty mentor programs, and many more. These resources helped me a lot after getting a hold of them. Also, I’d tell myself to get out of my comfort zone.  Make friends as those friends could, later on, be a connection for a possible job.

3. You have accomplished so much in your time here at GVSU, what is your next goal or goals after graduation? Do you want to stay in this area or move somewhere else?
After graduation, my goal is to stay around the Grand Rapids area while working in any computing field. Also, grad school is something that I have an interest in. Running-wise, I am going to see where the outdoor season takes me and hopefully keep running post-college.

You can hear more about Dennis and his big win on the Anchor Up Podcast made possible through the Grand Valley Sports Network here. We wish Dennis the best of luck in his future endeavors!


Page last modified March 23, 2021
Report a problem with this page