Undergraduate Research in action. Jordan Juzwiak spent her summer comparing the metabolic cost of running in sub 2-hour marathon running shoes with Dr. Kyle Barnes (Movement Science). What will your experience look like? 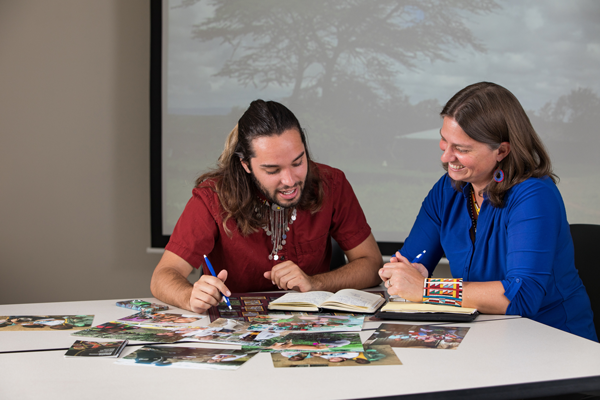 Roberto’s passion to travel to Africa started at a young age from watching nature documentaries, but his chance to explore and travel Africa arrived when he overheard Dr. Hedges talk about her research in Kenya in one of his first anthropology classes at GVSU.

“I remember listening to Kristin talking about her long history of research with Kenya,” Roberto said. “I have always wanted to go to Africa, so when class was over I went to her office hours and told her to ‘Take me to Africa.’”

Roberto became a Student Summer Scholar at the Office of Undergraduate Research and Scholarship researching his ‘Urban Olosho Ethnobotany Project.’

Since Dr. Hedges researched in Kenya before, she became his faculty mentor to help him with any barriers he would encounter. The cultural differences did not sink in until Roberto was on a 18-hour flight to Narok, Kenya.

Each day of their stay was a new chapter. Roberto would learn new things, and find out new trends in his research.

“What I found was that there was an issue with the elders not informing the other generations about the medicinal herbs,” Roberto explained. “The younger generations would be able to identify them, but wouldn’t be able to explain what each of them did. So, they would take advantage of the availability of drugs, because they did not know how to harvest the herbs.”

Roberto also found a trend that most of the Maasai tribe prefered medicinal herbs over pharmaceutical drugs.

“I like to think of medicinal herbs as their first aid,” Roberto said. “They would be the first treatment they would use before anything else… They trust in their herbs because they treat their illness, rather than our westernized medicine treating their symptoms.”

With the research coming to a close, Roberto reminisces about the experience and the cultural differences he faced.

“This research has benefited me in a lot of ways,” Roberto said. “I learned how to prepare for the interview, and how to actually do the interview... I had to make sure I wasn’t cutting into what they were saying because they would see any interruption as rude, and I could miss out on things they were trying to say.”

Roberto majors in Anthropology and Political Science and minors in Human Rights at Grand Valley State University. He currently is in the process of analyzing his data from Kenya, and is coding the information to the computer to store and save the information for insights in his research paper.


Page last modified August 7, 2018
Report a problem with this page