Undergraduate Research in action. This is an OXA-24 WT crystal grown in Josie Werner's prepared condition #4 buffer with Dr. Rachel Powers (Chemistry). What will your experience look like? 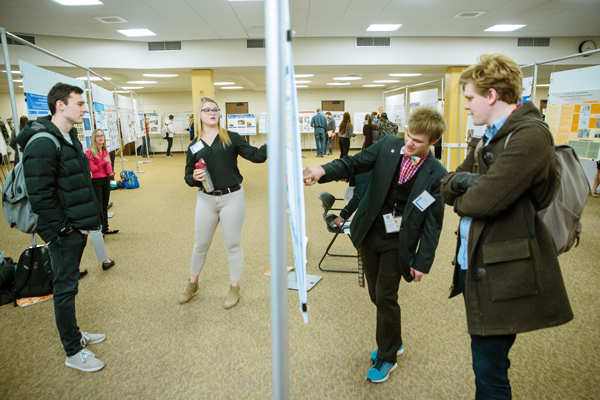 Brianna was given the choice in her class to present her research at SSD or to her class. She chose Student Scholar’s Day. “You get your research published, which is a huge deal… and you can put that on your resume,” Brianna said. “You can say ‘I am a published researcher.’ That is something that not a lot of undergraduate students can say, and I think it’s not hard because you are already putting in the work in a specific class…  it gives you the chance to talk about it.”

Student Scholar’s Day is an event held by the Office of Undergraduate Research and Scholarship, that is held once each year to celebrate the scholarship and creative work performed by GVSU students. The day showcases faculty-mentored student work, shared through many venues, including oral presentations, discussion and panel sessions, fine arts exhibits and performances, and poster presentations.

Brianna’s research studied the community in queer activist spaces because she personally is a part of the queer community and considers herself as an activist. “I think that figuring out ways to make activism more successful and activist groups more cohesive, benefits me because it is helpful to know what brings people together,” Brianna explained.  “You want your groups to last. The more you have that knowledge, the more likely you are to succeed.”

Brianna examined primary sources from a database of ephemera on queer activist spaces from 1985 to 2000 that were collected in both the Lesbian Herstory Archives and ACT UP archives. “I was very lucky that I was doing it with (Julian Mason, Women, Gender, and Sexuality Studies) because she was able to give me a flash drive with thousands and thousands of documents with primary sources on it,” Brianna said. “Going through all of that took eons to do… that was my biggest struggle.”

Brianna’s project analyzed relationships and bonds that formed in queer activist spaces, in order to understand how identities impact the formation of differing dynamics between people. “I looked at what brought groups together, and the reasons why the different activist groups weren’t sustaining that group together,” Brianna said. “ I kind of separated them that way, and in each of those groups I analyzed their language... and tried to decode the language to figure out if there was anything indicative of internal struggle within the groups. Some of the sources I had were transcripts of voicemails, and personal emails, letters and newspaper clippings, and things like that.”

During Student Scholar’s Day 2018, Brianna was nervous to present her findings. “I was so scared on Student Scholar’s Day,” Brianna said. “I was scared because you put so much work into this and it kind of becomes your baby. I don’t want people to insult it, I don’t want people to think I’m stupid. I was really scared. But, when I got there, people were genuinely interested in what I had to say, and were excited about my research.... You get to feel like you are teaching something, which is really important because everyone has something to learn.”

Brianna recommends students with a variety of passions to participate in Student Scholar’s Day in April. “Take a chance on it, because there is this giant system that is there to help you… it’s their job to help you, and you just have to ask for it.”

Brianna is a senior studying women, gender, and sexuality studies. She plans on going to a master’s program in social work in the Fall.

Return to the listing of student spotlights.