A celebration of history, culture, traditions and contributions of Asian American and Pacific Islanders. See more

A Recognition of Fred T. Korematsu 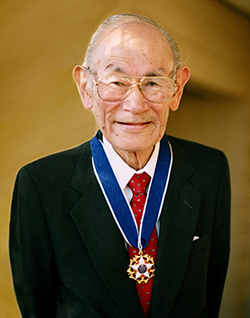 Korematsu’s story is one of triumph over the injustice endured by Japanese Americans following the bombing of Pearl Harbor. Born on January 30, 1919, Korematsu deed the U.S. government’s order to report to an assembly center after the bombing of Pearl Harbor. He was convicted for his refusal and appealed his case all the way to the U.S. Supreme Court, which ruled against him in a 6-3 decision in 1944.

After World War II, Korematsu moved to Michigan. His conviction was formally vacated on November 10, 1983 by U.S. District Judge Marilyn Hall Patel based on information that the War Department had misled the Supreme Court with false allegations of espionage and sabotage. In 1998, Korematsu was honored with the Presidential Medal of Freedom by President Bill Clinton.

Special Tribute to Fred T. Korematsu by the State Of Michigan

A Japanese American civil rights icon was posthumously recognized and celebrated by the State of Michigan and Grand Valley at an event January 30.

Fred Korematsu, born in 1919, defied the U.S. government’s order to report to an assembly center after the bombing of Pearl Harbor. He was convicted for his refusal and appealed his case up to the U.S. Supreme Court, which ruled against him in 1944. He moved to Michigan after World War II and his conviction was vacated in 1983. He was presented with the Presidential Medal of Freedom by President Bill Clinton in 1998.

At the event, Korematsu was honored by the Michigan Department of Civil Rights, Michigan Asian Pacific American Affairs Commission and Grand Valley’s Office of Multicultural Affairs. A documentary of his life was shown, followed by a panel of speakers that included Matt Wesaw, director of the Michigan Department of Civil Rights, and Frances Kai-Hwa Wang, correspondent for NBC Asian America.

Korematsu is the first Asian American to be honored by a state and have a day — January 30 — named in his honor.

The event was part of Grand Valley’s Asian American and Pacific Islander Heritage Celebration. The next event will take place February 11 with a presentation by Kimberly McKee, assistant professor of liberal studies, “The Celebrated ‘China Doll’: Troubling Asian Adoption in Television.” 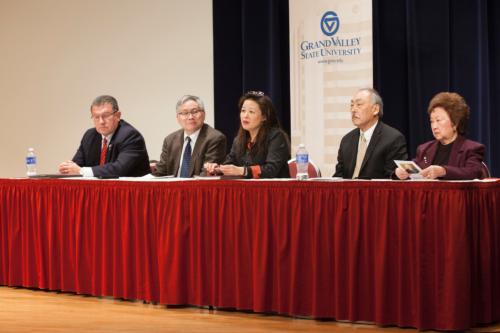 
Page last modified January 14, 2020
Report a problem with this page