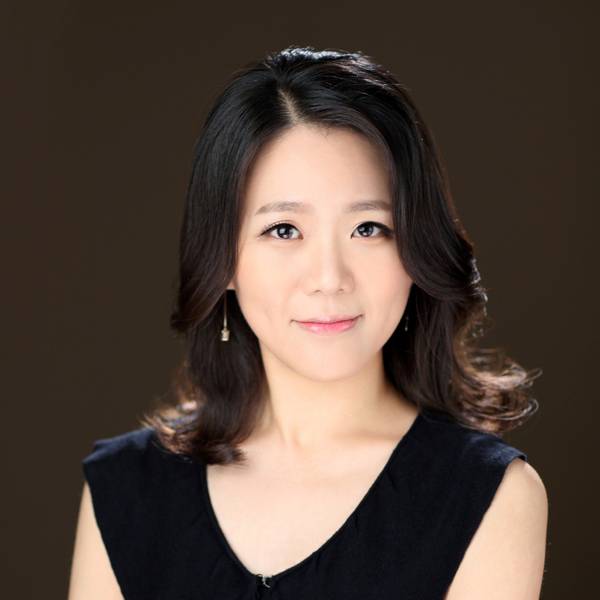 A curator of the new GV Piano Chamber Series, Sookkyung Cho is Associate Professor of Piano at GVSU. As a soloist and chamber musician, she has appeared in venues such as Alice Tully Hall at Lincoln Center, Weill Recital Hall at Carnegie Hall, Chicago Cultural Center, Sarasota Opera House, Conservatoire d'art dramatique de Montréal in Canada, Château de Fontainebleau in France, and Xi’an Conservatory in China. Dr. Cho received a bachelor’s degree from Juilliard, where she was honored with the John Erskine Graduation Prize, and earned a master’s degree at Peabody and a doctorate at Juilliard as a C.V. Starr fellow. Her debut CD, Schubert’s 1817 Sonatas, was released on Centaur to critical acclaim in April 2021. She is proud to be an adopted Michigander! 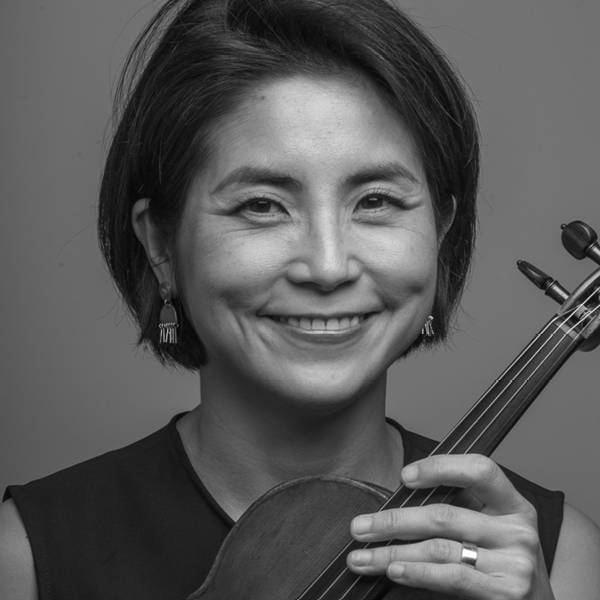 Haijin Choi is a section violinist of Grand Rapids Symphony and a faculty at Calvin University. Originally from South Korea, she moved to the United States in 2000 to continue her post graduate program at Northwestern University, IL after finishing her BM and MM from Seoul National University. Inspired by her teacher and mentor Blair Milton, she continued her interest in orchestral experience by participating in National Repertoire Orchestra and Civic Orchestra of Chicago working with Daniel Barenboim, David Robertson, Bill Eddins and Pinchas Zukerman. While playing with Charleston Symphony, SC in 2002 - 2003, she performed a recital for Piccolo Spoleto Festival. She has been a member of Grand Rapids Symphony since 2003. You can find Haijin Choi's performances from the Grand Rapids Symphony, the Chamber Music Festival of Saugatuck in summer, the Sunday Classical Concert Series for the Grand Rapids Art Museum, a bi-annual house concert and private events. She has orchestrated a chamber music series at Fredrik Meijer Gardens and Sculpture Park beginning in the summer of 2020. She is married with one boy and she loves playing piano with him. 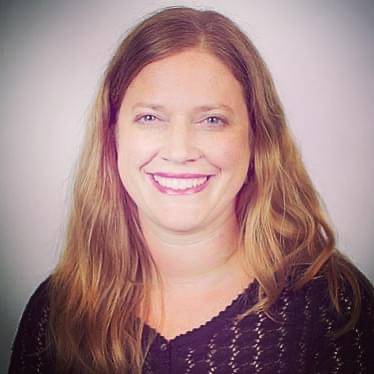 Violinist, Megan Crawford, has been a member of the Grand Rapids Symphony since 1999, and is currently Interim Professor of Violin at Western Michigan University. Before becoming a mother (of 5), she concertized as a soloist and chamber musician. She earned her Bachelor of Music from the University of Michigan, and Master of Music from Manhattan School of Music, where she won Concerto Competitions at both schools, in addition to other awards. More recently, Ms. Crawford has been a featured soloist with the Grand Rapids Symphony, Dearborn Symphony, Lansing Symphony, Kent Philharmonic, and the Baroque on Beaver Festival Orchestra. She has performed extensively as a chamber musician, including several recitals at the GRAM Sunday Classical Series, and helped create String Leadership Camp at GVSU, where she was Visiting Professor from 2015-2021. In addition to a successful private studio, Ms. Crawford has previously taught at Calvin College, Western Michigan University, Phoenix Phest, and substitute taught in the preparatory divisions for Manhattan School of Music and Mannes School of Music. 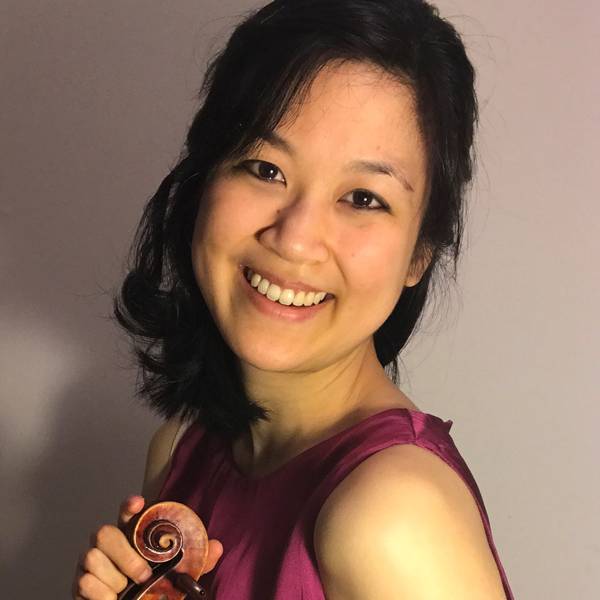 Letitia Jap enjoys a career as a performer and teacher. She finds most joy using music to connect with people. Letitia has been a featured soloist with orchestras like the Seattle Symphony, Austin Civic Orchestra, and Bellevue Philharmonic Orchestra. Additionally, Letitia has served as concertmaster with orchestras such as the Seoul International Community Orchestra and the Boston Chamber Orchestra.

Letitia also maintains an active schedule as a teacher, hoping to inspire the next generation of musicians. Letitia was Head Chamber Ensemble Coach at the University of Rochester, held teaching assistant positions at the Eastman School of Music, was faculty at the Eastman Community School of Music, and World Music lecturer at Nazareth College. She is Affiliate Professor of Violin at GVSU. Apart from making music, Letitia loves to read, eat good food and try new restaurants, and explore cities. 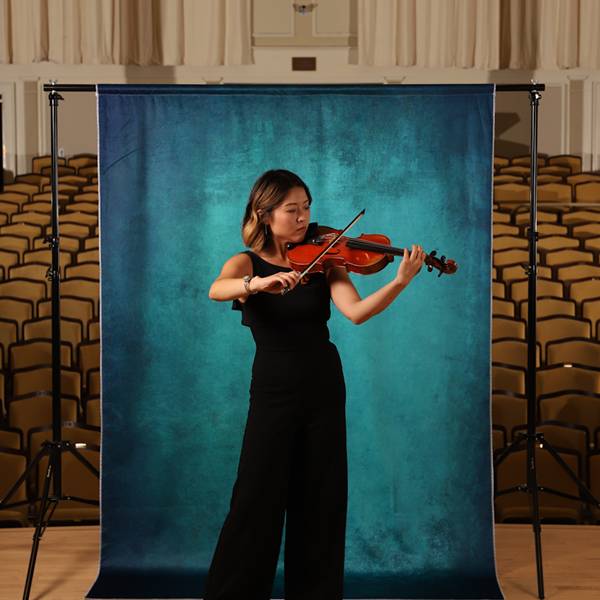 Grace Kim started serving as assistant concertmaster in the Grand Rapids Symphony in 2017. She started her violin studies at the age of 10, when her family immigrated from South Korea to Yakima, WA. Her performances a soloist, chamber, and orchestra musician include a debut at the Kimmel Center with Philadelphia all city orchestra concerto competition winner, Medomak Conductors retreat musician in-residence, St.Louis Symphony Orchestra, Ann Arbor Symphony, Spoleto Festival Orchestra(Charleston), Amalfi Coast Music Festival.

Grace completed her graduate studies at the University of Michigan in May of 2017, a Specialist’s degree with David Halen, M.M in violin performance and chamber music with Aaron Berofsky. With a growing dedication to urban music teaching, she was an assistant teaching artist with the Sphinx Organization-Overture in the Detroit public elementary schools.

Grace plays on a Caressa & Francais of Paris, France dated 1906, generously on loan from the Virtu Foundation. 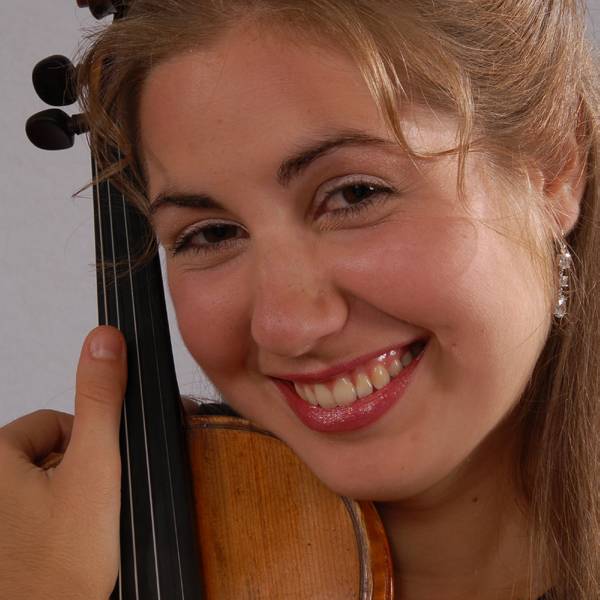 The Canadian violinist Marie-Ève Poupart played solo and chamber music concerts in places as diverse as Washington DC, New York NY, Baltimore MD and Chattanooga TN in the United States, in Hungary, in China, in the Bahamas, in the Virgin Islands and in more than thirty cities in Canada. She was featured as a soloist with the Orchestre Symphonique de Montréal, toured with the Jeunesses Musicales du Canada, worked with Yannick Nézet-Séguin, Ignat Solzhenitsyn, Barry Shiffman, Todd Palmer, Ilya Kaler, Jonathan Crow, Anton Kuerti, Boris Slutsky, as well as many other fine musicians. She was honored to win the Prix d’Europe competition and a grant from the Canada Council for the Arts in 2009, as well as getting the opportunity to play on the violin Giovanni Tononi Bell 1700 from 2009 to 2012. She won the Concours de musique du Canada at the age of eleven and the Lieutenant Governor of Quebec later on. Meanwhile, she pursued an Artist Diploma under the wings of Pamela Frank at the Peabody Institute of music in Baltimore. She had previously completed her graduate diploma at the Conservatoire de musique de Montréal with Johanne Arel as her main teacher. She works with the string orchestra I Musici de Montréal since January 2013 and also played with Les Violons du Roy for many years. 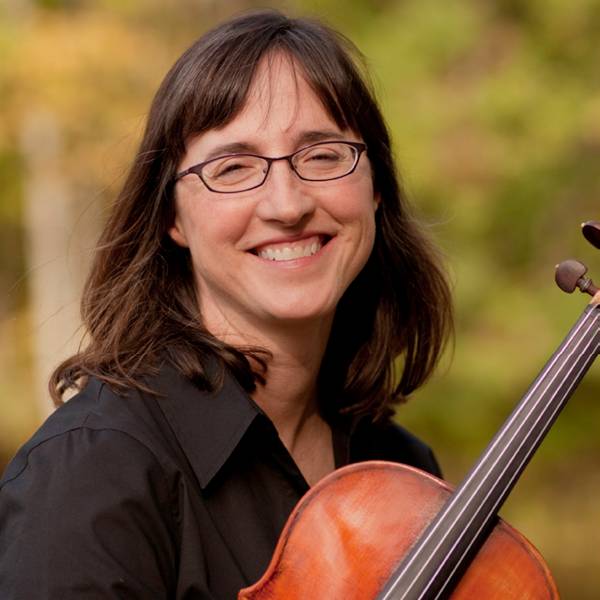 Barbara Corbató is currently Assistant Principal Viola of the Grand Rapids Symphony, where she has performed since 1990 and is also a member of the Symphony’s Calder String Quintet. In addition, she is an active chamber musician- performing chamber music throughout West Michigan with colleagues and friends in addition to performing regularly at the Chamber Music Festival of Saugatuck. Ms. Corbató is also active as a viola teacher- serving on the viola faculties at Hope and Aquinas Colleges, while also maintaining a busy home viola studio. She has also served on the viola faculty at Calvin College.

Ms. Corbató grew up in Columbus, Ohio, then attended the University of Michigan, where she received Bachelor and Master of Music degrees in Viola Performance. 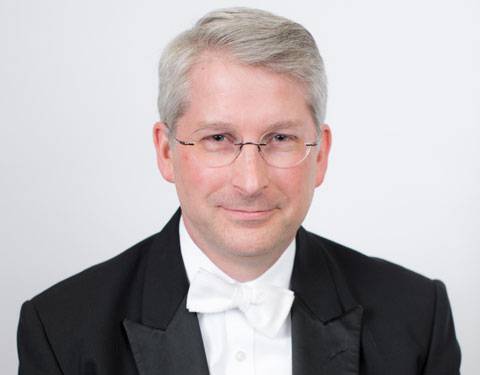 At B.U., he had the good fortune of studying viola with Bernard Kadinoff, violist with the Boston Symphony Orchestra.  At C.U.A., he studied with Richard Parnas and Rafael Druian. As a member of the Spoleto Festival Orchestra in Charleston, South Carolina, and Tanglewood (then the Berkshire Music Center) as a Boston Symphony Fellow, he worked with many of the world’s great conductors.

Currently, he is a member of the Grand Rapids Symphony Orchestra.  He is also a Senior Affiliate Professor of Music at Grand Valley State University. 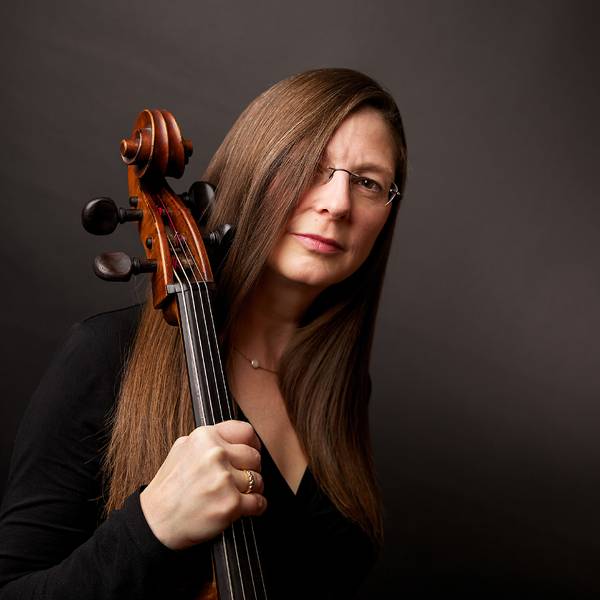 Alicia Eppinga has been a member of the Grand Rapids Symphony since 1989 and Principal Cellist since 2011. Ms. Eppinga was raised in Grand Haven, MI and attended the Interlochen Arts Academy from 1980-1983. She received her Bachelor of Music Performance at the Oberlin Conservatory of Music in 1987 as a student of Richard Kapuscinski, where she was awarded the John Frazer Award in Cello Performance. In 1989 she received her Master of Music Performance at the Eastman School of Music with Steven Doane. She was a fellowship student at the Tanglewood Music Center in 1987 and 1989 where she worked with musicians such as YoYo Ma, Joel Krosnick, Seiji Ozawa and Leonard Bernstein. Alicia Eppinga performs regularly in programs at the GRAM and at the Chamber Music Festival of Saugatuck. She is a member of Ensemble Montage, a group dedicated to bringing unique and contemporary chamber music to West Michigan. She is a founding member of Castalia, a piano quartet that focuses on music by women composers. She is also the cellist in the Devos String Quartet. Ms. Eppinga has appeared as soloist with the Kent Philharmonia, the Calvin Alumni Orchestra, the Holland Symphony, and the Grand Rapids Symphony. In 2013, she collaborated with composer Alexander Miller to create the Madame Bovary Concerto for Cello and Orchestra. Alicia is the cello instructor at Hope College and also maintains a studio of private students. She lives in Ada with husband Jim and children Leo and Iris. 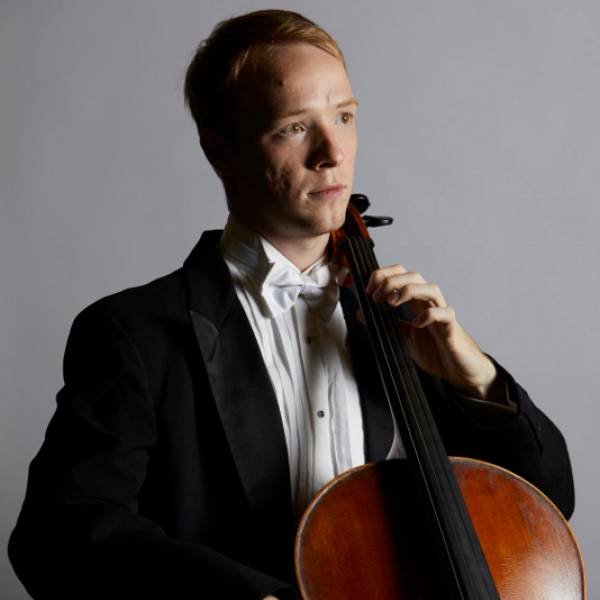 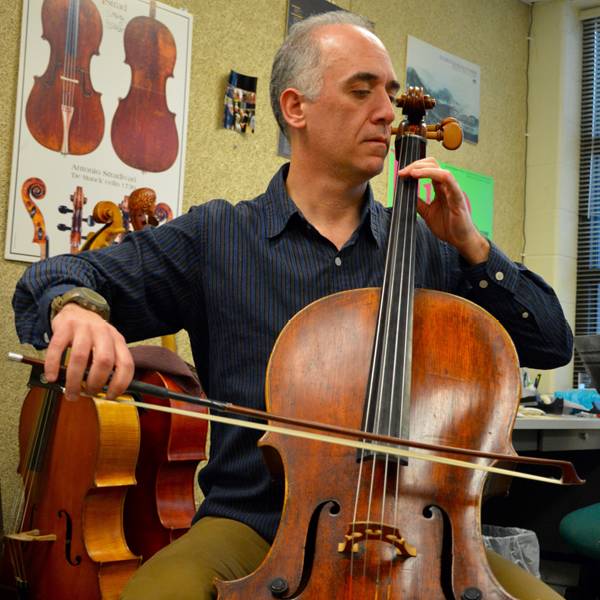 Pablo Mahave-Veglia is a Professor at Grand Valley State University, and cellist and teacher of broad interests. He counts among his musical influences his late mother, the noted piano pedagogue Mercedes Veglia, as well as such artists/teachers as Arnaldo Fuentes, Steven Doane, Tsuyoshi Tsutsumi, Janos Starker and Uri Vardi.

Much in demand as a chamber musician, lately he joined the roster for the Ontario-based “Magisterra Soloist” for a tour of eastern Canada, as well as performing as a member of the Harlem Chamber Players during their residency at the University of Iowa. This last year he played the complete Vivaldi Sonatas with harpsichordist Gregory Crowell at the “Music at Penn Alps” in Maryland, as well as travelled to his native Chile to play a recital at the Frutillar Festival, and play the Saint-Saëns Concerto with orchestras in Antofagasta and La Serena.

An alumnus of the Interlochen Arts Academy, Dr. Mahave-Veglia holds degrees from the University of Wisconsin-Madison, Indiana University and the Eastman School of Music. He performs on a cello made by William Forster in London, 1790. 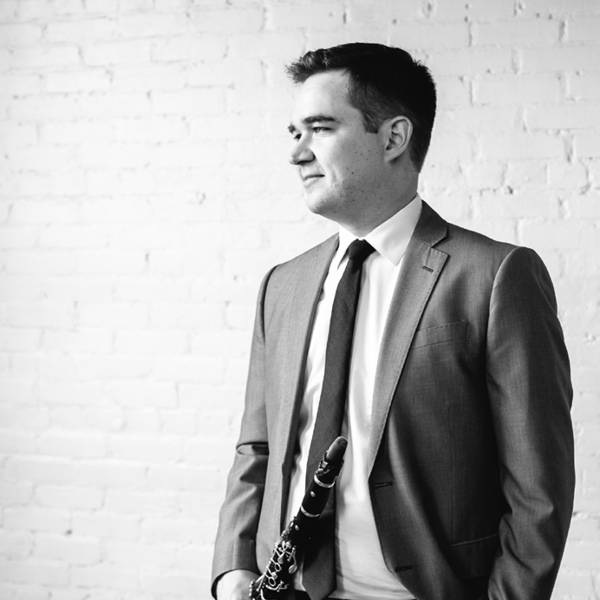 Dr. Gary June is a clarinetist and educator based in Grand Rapids, Michigan, where he teaches clarinet at Grand Valley State University. He is the principal clarinetist of the Holland Symphony Orchestra and the 2nd/Eb clarinetist of the Saginaw Bay Symphony Orchestra. As a member of the clarinet/piano group, the Amosa Duo, he has given recitals at universities throughout the United States, the PianoForte Institute in Chicago, IL, and several of Taiwan’s most prestigious concert halls. A committed educator of primary and secondary-aged students, Dr. June spends summers teaching and playing at the Illinois Summer Youth Music Pre-College Clarinet Camp and at Blue Lake Fine Arts Camp. His primary teachers include Dr. Arthur Campbell, Daniel Silver, and J. David Harris. 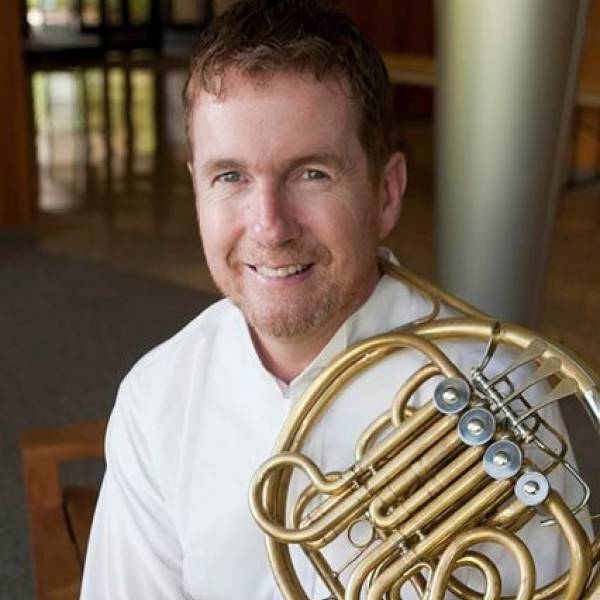