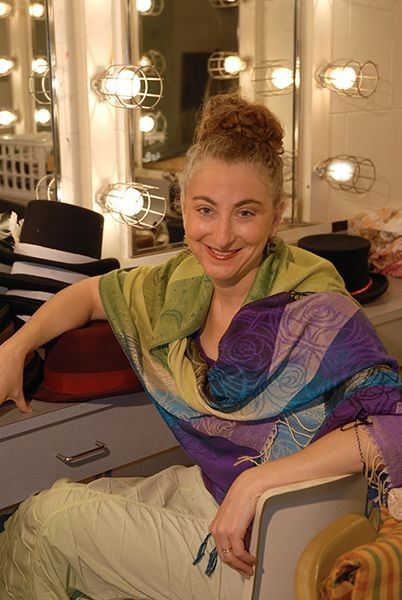 Karen Libman is a stage director, theatre professor, writer and storyteller. She directs frequently for the Grand Valley Shakespeare Festival ( Richard III, A Midsummer Night’s Dream; Love’s Labour’s Lost; Macbeth; A Comedy of Errors, and The Merchant of Venice), as well as for mainstage university productions at Grand Valley State University, including Kindertransport, Oedipus; Big Love; Mother Courage and Children; and Angels in America, Part 1.  Libman helped to conceive the GV Shakespeare Festival’s Bard to Go (BTG) touring program, which has served over 8000 students in Michigan, and she pioneered the International BTG Program, taking Shakespearean scenes to students in such countries as Jamaica, The Bahamas, and China. In 2012, she traveled with students to El Paso, Texas, where they performed (under her direction) the world premiere of the English version of Antona Garcia at the Siglo de Oro Spanish Golden Age Festival. She has been active in many national organizations including the American Alliance for Theatre in Education (AATE) and the National Storytelling Network, and she was the executive secretary of the International Drama/Theatre Education Association (IDEA) from 2010-13. Her published work can be seen in such journals as Arts Education Policy Review, Teaching Theatre, Youth Theatre Journal, and Research in Drama Education; and she was the Editor of the quarterly journal STAGE of the Art.  Libman collaborates with renowned translator Dr. Diane Rayor on her Women in Greek Drama series, directing premiere translations of Rayor’s Medea and Antigone, both of which were subsequently published by Cambridge University Press in 2013 and 2011 respectively.  A professional storyteller, she can be seen telling tales at festivals, museums, and schools across the Midwest. Professor Libman enjoys administrative work as well, and has served GVSU in interim capacities as the Assistant Director of the Pew Faculty Teaching and Learning Center, Chair of the Department of Classics, Director of the GVSU Honors College, and Chair of the Department of Art and Design.   Libman's recent artistic work focuses upon themes such as theatre for social justice, feminism in youth theatre, Shakespeare, classical drama, and storytelling. She is proud to have been selected as a Fulbright Scholar in 2016, and will be traveling to Bangladesh to direct a Shakespeare play at the University of Dhaka.  The mother of two grown children, Libman lives in Kalamazoo with her husband, historian Mitch Kachun.