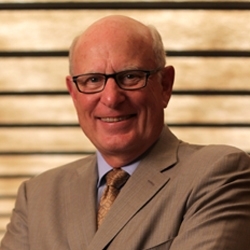 A native of Holland, Michigan, Richard (Dick) Haworth has had a lifelong passion for innovation. He is a graduate of Western Michigan University, and served as a commissioned officer in the United States Army. Dick began his career at Haworth, Inc., in 1964 as an assistant sales manager. In 1975, he was named president and CEO of Haworth, and led the company through two decades of explosive growth. In 1976, he and a team of Haworth employees invented the world’s first pre-wired office panel, a product that changed the face of the office furniture industry forever. In all, Dick holds 17 separate patents for innovation in office furnishings. His leadership helped transform Haworth from a small, single-product company, into a world-leading designer, manufacturer, and marketer of office furniture and seating. He currently serves as Chairman Emeritus of the Haworth Board. Dick is a member of the Grand Valley University Foundation Advisory Cabinet. He sits on the board of advisors for the Mackinac Center for Public Policy, is a member of the Michigan Business Roundtable, and is involved in community philanthropy.