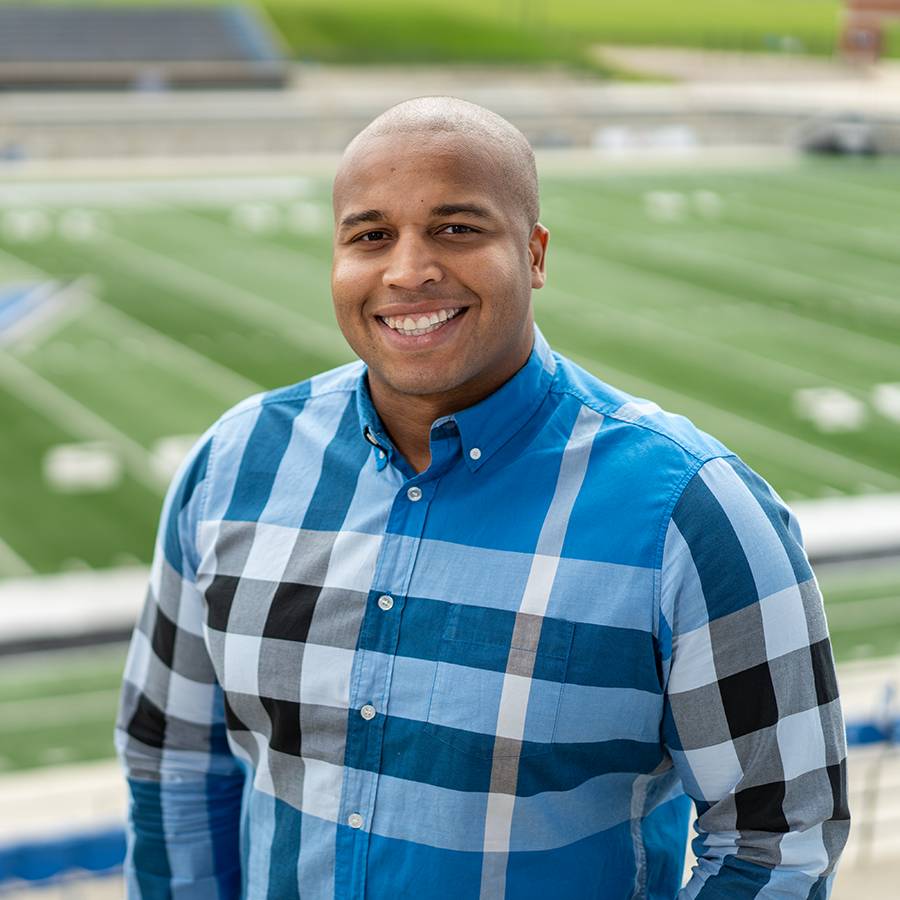 Former standout Laker defensive lineman Michael McFadden played professional football after graduating. Now a medical device sales representative, McFadden and his wife, Clarice, have a 2-year-old son, Isaac. McFadden credits his GVSU experience for much of his success in life.

Why did you decide to attend Grand Valley?

When I was a senior in high school, I was recruited to play football by numerous universities. I had not heard of Grand Valley State University until a month before national signing day. The head coaches at the time recruited a teammate of mine. I went on a campus visit and loved GVSU and West Michigan. I liked the top-notch facilities there.

I chose Grand Valley because it felt like home, the academics are excellent, and the football team was very successful. I wanted to compete for national championships.

Did you play football after graduation?

In 2007 I signed a three-year contract to play for the Tampa Bay Buccaneers. It was a short-lived career after an injury. I went through rehabilitation and then signed to play for the Grand Rapids Rampage of the Arena Football League. I played a full season in 2008. I was selected to the All-Rookie Team, led our team in sacks, and set a franchise record for most sacks in a game. I was also selected as member of the Al Lucas Hero Team for my presence in the community. In 2009, I played in the Canadian Football League for the Hamilton Tiger-Cats. I was injured again and decided to retire in 2009 after my second major injury.

What separates Grand Valley from other NCAA Division II schools is a combination of excellence in all aspects. The football program has a rich tradition; the coaches prepare the players mentally and physically. There is tremendous support from alumni and the community. The facilities are state-of-the-art, including having access to the Kelly Family Sports Center, an indoor training facility. In my opinion, Grand Valley academics are second to none in Division II.

What is the most valuable lesson you’ve learned through football?

The lessons I have learned are to work hard, be accountable, strive for excellence, and be a good teammate. If you were a minute early to a football meeting or practice, you were already considered late. That has helped me learn to be early for appointments. Our motto was to be 1/11 of the team. It reminded us to always do our job and not to worry about doing someone else’s job. If all 11 players on the field are doing their 1/11 to the best of their ability, we will be successful as a team. All of these lessons have helped me have success with life after football.

What is your favorite memory of playing football at Grand Valley?

What advice do you have for student athletes?

Watch what you publish on social media. I have seen a lot of student athletes and professionals lose credibility, and ultimately, lose their eligibility, job, family, and life over a bad decision made public through social media. Also, set goals, stay focused, and work hard.

Tell us something unique about you.

I have played the drums and have sung in church since I was in elementary school.

Why did you give a gift to the Jamie Hosford Football Center?

Laker football has given me so many tools to be successful in life; I felt that it was necessary to give back. The student athletes deserve to be in a facility that will increase their chances to be successful. The outstanding center will also help with recruiting top talent to Grand Valley.

I was a leader when I played, I believed if I stepped up first to give a gift other former teammates would follow.

What is special about the new facility?

Why is it important for alumni to support Grand Valley?

I was blessed to play football and receive my education from GVSU because others before me donated. Now I’m making a positive impact on society because of the lessons I learned. I am now able to give back because of what Grand Valley has done for my past, present and future.

What would you say to encourage others to give back?


Page last modified August 28, 2019
Report a problem with this page