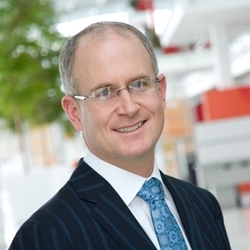 Born in Holland, Matthew Haworth has been immersed in the family business for his entire life. He began absorbing knowledge from his father, Dick Haworth, and company founder G.W. Haworth, as a young boy. He first officially joined Haworth, Inc., during the summer of 1983, taking an assembly job in manufacturing to learn the business from the ground up. He worked several summers while earning a bachelor's degree in Marketing from Indiana University. In 1991, Matthew started with the company full time. He began his career working at Haworth dealerships in Seattle, Washington, and Washington D.C., and later served a stint with Haworth's Atlanta sales team. He has also held a wide variety of roles in marketing, manufacturing, planning and purchasing, and led the organization's largest business unit for several years. To further prepare himself for leadership, Matthew completed Harvard University's board governance program, as well as the executive leadership program offered by Northwestern University's Kellogg School of Management. In 2009, he was named chairman of Haworth, Inc. He has earned Leadership in Energy and Environmental Design (LEED) accreditation from the United States Green Building Council, and serves on the board of the Grand Valley University Foundation. In his spare time, he enjoys volunteer work as a licensed coach for the United States Soccer Federation. Haworth, Inc. is a global leader in the design and manufacturing of office furniture and organic workspaces, including systems furniture, seating, storage, wood casegoods, raised access floors, and movable walls. The family-owned company serves markets in more than 120 countries through a global network of 600 dealers.