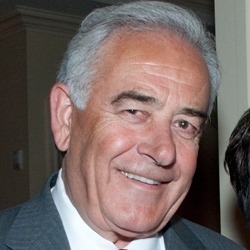 Christos (Chris) Panopoulos has been an active member of the Grand Rapids community for 50 years. Chris has been involved with many projects in Grand Rapids, and currently serves on the boards of the Metro Health Foundation, Grand Valley University Foundation, Leadership 100, Extruded Aluminum Corporation and US Golf Cars. Chris has previously served as president of the American Hellenic Education Association and in leadership of the local and national Greek Orthodox Church. He is an Archon of the Greek Orthodox Archdiocese. In the cosmetology industry, Chris was involved with Intercoiffure America and the International Salon Chain Association. Chris is the retired founder and CEO of Salon Enterprises, a group of businesses including Panopoulos Salons, which was the number one salon chain in the country in 1988. That same year, he was selected as Small Businessman of the Year. Chris was inducted into the West Michigan Business Hall of Fame in 2004 and received an honorary Doctorate of Business Degree from GVSU in 2016.