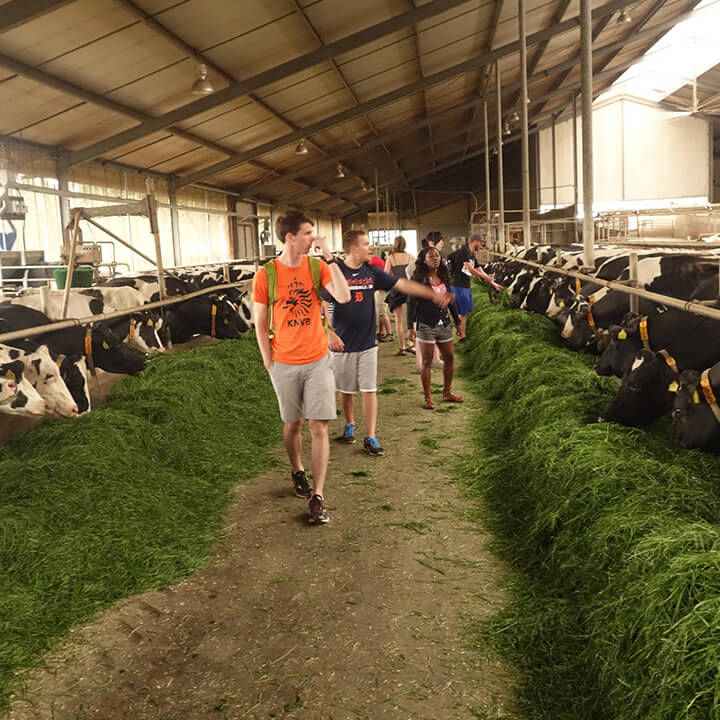 From cities below sea level to industrial sites turned nature preserves, students who take advantage of the Netherlands Geography and Planning study abroad trip get to experience a variety of approaches to sustainable landscape development. But for the program director, Grand Valley State University Professor Jeroen Wagendorp, one new addition to the tour stood out from the rest.

“It’s kind of crazy,” said Wagendorp. “I mean, there you are in the hustle and bustle of the busy harbor – and then there’s a floating dairy farm. Normally you have a farm out of the country and then the milk is shipped to the customer. They’ve reversed that logic, saying they want the farm to be next to high density urban populations. It’s definitely a demonstration project to showcase the ability to produce milk on scarce land.”

The floating farm takes up 21,527 square feet with three stories covering every step of the dairy production process. The top is an open air cow garden with cover protecting from the elements, supported below by two levels of factory that process milk, produce fruit for yogurt, recycle rain and wastewater, and manage feeding and manure.

“The milking is completely automated,” explained Wagendorp. “It’s much more systematic, much more thorough, especially in cleaning the udders of the cow prior to milking. That’s the part that’s still done manually in most farms.. But here the cleaning is more thorough. They analyze the milk that comes from each cow, so they can adjust a cow’s diet according to the makeup of its milk – the fat content, the protein content. Since it’s kosher and halal, there cannot be any blood in the milk, and they can detect that – whereas you or I milking, we would never know.”

Far away from the countryside that would normally house such an operation, the floating farm had to innovate on established practices to feed the cows and dispose of their waste, resulting in a much more “green” and efficient production.

“You use as much urban food waste as possible,” Wagendorp said. “In Rotterdam, the craze of microbreweries has caught on similar to West Michigan – the waste grains there are shipped to this farm as supplementary feed for the cows. Farmer’s markets, even grocery stores with products that are no longer suitable for shelves. Rather than composting or just throwing it away, an urban dairy farm like this can benefit. They’re on the water, so they have a separator that removes the solids from the liquid manure, and the solids are then used as bedding for the cows. It sounds gross, laying in sterilized cow poop, but once it has been heated up it’s completely inert, organic, and free of bacteria. The rest of the cow poop can be sold as gardening soil. The liquids, meeting water quality standards, gets discharged. Using their solar panel array to power that process, you are coming a whole lot closer to net-zero energy usage.”

This summer, twelve students got to tour the floating farm before it’s official opening in the fall. Wagendorp looks forward to taking more students to visit the site next year when it’s running at its full potential.

“This was only two and a half hours out of ten days of similar stops – we visited an energy independent farm with its own methane digester, we went on site where contractors were building new net-zero homes – but this one really stood out,” he said. “It’s so unique and outside the typical box of farming that I think students get something really valuable from the experience.”


Page last modified August 21, 2019
Report a problem with this page