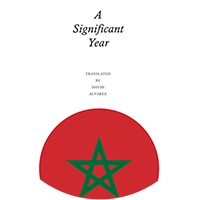 Professor David Alvarez, who teaches courses in contemporary world literature and researches literary representations of migration from North Africa to Europe, has published a translation of a travelogue by Moroccan academic and former Minister of Education, Abdallah Saaf. A Significant Year (Une année considérable in the original French) is the author's account of his travels around Morocco in the months leading up to the country's 2007 national elections, the second to have been held under King Mohammed VI. In addition to providing vivid portraits of Morocco's varied people and places, the author ponders the country's problems and promise fifty years after it gained independence from France and Spain. Published by Seagull Books (Calcutta and London), in the US A Significant Year is distributed by the University of Chicago Press.


Page last modified January 10, 2020
Report a problem with this page