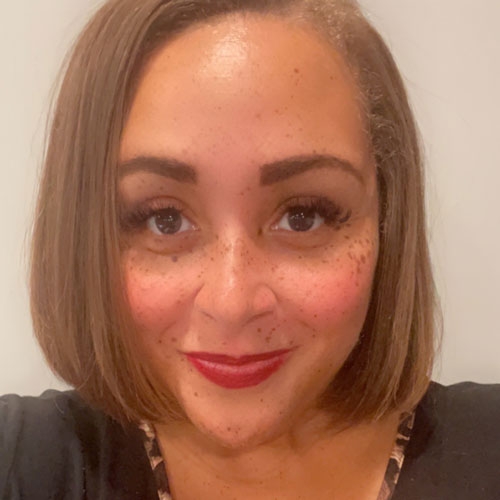 Throughout her life, Merrideth Okonkwor has been driven to create long-lasting connections with others. So much so that sometimes, she says, she feels like she has an alter-ego.

“I almost see myself as a counselor because I listen closely, identify pain points, and meet people where they are at to ensure they know they are being heard.”

That desire to offer meaningful support stems from being part of a family with a significant legacy of local, state, and national community leadership.

Merrideth grew up in the city of Detroit with parents who were both very engaged in political and community activism. Her father, Lowell Perry, broke barriers in professional sports, television broadcasting, and the auto industry before eventually being appointed by President Gerald Ford to be commissioner of the U.S. Equal Employment Opportunity Commission. He also served as the director of the Michigan Department of Labor in the 1990s.

As Merrideth got older, her own passion for giving back also grew.

“I knew early on that I wanted to help people, but I wasn’t quire sure in what way,” she says.

Merrideth initially began her journey by exploring the education field when she was an undergraduate student at Oakland University. Her intention was to be a teacher, but she soon learned that wasn’t the best fit for her goals.

Merrideth adjusted paths and eventually graduated with a degree in human resource development and human services. Shortly after graduating, Merrideth still found herself connected to education after landing a role in Michigan’s first charter school, where she was tasked with developing a life skills curriculum and helping fellow staff execute it.

That first job launched a robust career that put Merrideth in a variety of positions supporting and leading educators and students, both at the K-12 level and in higher education. Her roles have involved work related to admissions advising, ed tech consultation, college and career coaching, DEI strategizing, and directing community engagement and learning efforts.

Through all of her career experiences, Merrideth says that she has always led by focusing on other people first.

“I never want to leave people feeling like I’m a stranger,” she says. “I am huge on relationships and hope people find me to be open and pleasant to work with.”

Now, as a school consultant with the GVSU CSO, Merrideth says she is eager to work alongside boards to bring more success to their schools.

“I want our board members to know that I take pride in working with them, and am an advocate for them. We [GVSU] have commonality with our boards in that we all want what’s best for children.”

Outside of her work role, Merrideth enjoys writing, singing, and spending time with her husband and three children. With a daughter playing collegiate basketball and two brothers with career stops as executives in professional sports, Merrideth says the family is still very sports-oriented. She also is a member of Delta Sigma Theta Sorority Inc., staying active with her chapter by working with the education committee.


Page last modified January 21, 2022
Report a problem with this page