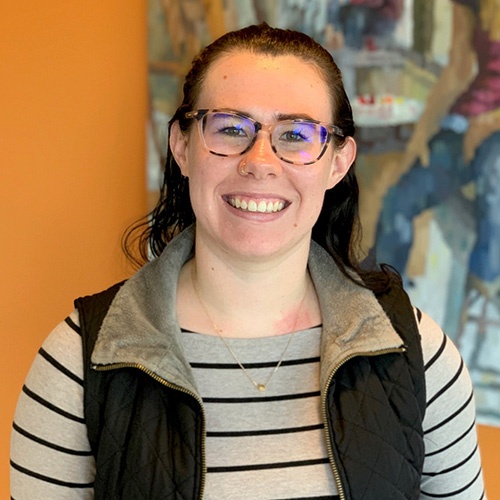 The GVSU Charter Schools Office is excited to welcome Genevieve Reside to the team as the School Accountability Specialist.

Genevieve was born in Chesapeake, Virginia, but spent almost her entire life growing up in Michigan near Walled Lake. When she started exploring options for after high school, she knew that a lot of people from her community went to GVSU. She had a few friends planning to go to GVSU, and when she visited Allendale, she knew she had found a good fit.

“It was the first campus that I had set foot onto, and I thought, ‘This feels right. I can see myself here.’ So GVSU was the only school I applied to and the only one I was interested in.”

While she was confident about her decision to enroll at GVSU, Genevieve initially didn’t know what she wanted to study. In her first year she explored a wide variety of academic fields and quickly found one that stuck out to her.

“I took Criminal Justice 101 and had a professor that was very influential. I really connected with her and her coursework more than any other class that I was taking,” she said. She decided to pursue criminal justice further and quickly became more invested in the field, declaring it her major along with a minor in juvenile justice.

Genevieve says her coursework in juvenile justice sparked her interest in connecting more with K-12 education. While the classes themselves only briefly touched upon kids in schools, that was the learning that most resonated with her.

“I clung on to that piece the most because I found it so interesting,” she said. “I thought it was so important because of how much time kids spend in school. It became the focus of a lot of my papers and research.”

She also furthered her knowledge about K-12 students by working as a Campus Navigator for the CSO, spending time leading tours, mentoring students, and being a GVSU student ambassador that would build connections with the K-12 students who came to GVSU for specific camps for programs.

“The most important thing I learned is that you learn just as much from the students as they learn from you,” she said. “I think you really must go into work with youth having that mindset. It’s not just like I’m going to pour all this knowledge into them and their going to sit and take it. It needs to be a two-way conversation to create the best learning environment.”

Stepping into her new role at GVSU, Genevieve sees her background being impactful for schools as she ensures they are meeting expected legal standards. “Part of our work at the CSO is to ensure that schools are operating in a safe and effective manner, and without those basic requirements, none of the important learning and student growth can occur,” she said.

She said a big part of doing that comes from leaders being exceptionally attentive to others in the school community.

“Pay attention to everything around you and listen to all the stakeholders who are being impacted by any policies that are put in place. Make them a part of the conversation so you can hear all concerns and think about what you can do to address them. If you’re part of the school board, you are there for a reason. If you’re passionate about it, then that should definitely drive you to do the best you can for all parties.”

Outside of work, Genevieve enjoys traveling, hiking, aerial acrobatics, spending time with her cat, and further connecting with the university community as a member of the GVSU alumni marching band.


Page last modified November 3, 2022
Report a problem with this page