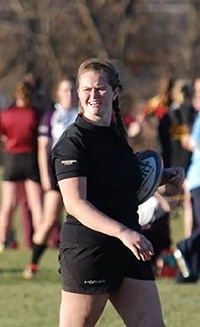 Emily Dascenzo is a sixth year here at GVSU studying health and physical education.  Teammates call Emily by her nickname, Scoobs. Emily is from Howell, Michigan, and is very well respected by her teammates.  Teammates say “Emily will be the first one to correct you in a positive way and it really increases the team's skill level and we work better on the field with her”.  Scoobs leads her team with enthusiasm on and off the field!

How did you become a part of the GVSU Women’s Rugby Team?

I became a part of the women's rugby team here at Grand Valley because at the time I wasn’t doing anything on campus, but I had a friend who was a part of the team and she was always with the rugby team.  So I needed to know what that was about. So I went to one practice and I did not stop.”

What is the best part about competing?

“The best part about competing at least with rugby is that while you’re on the field you’re tackling each other and you’re hitting each other as hard as possible but as soon as that last whistle blows you’re walking up to everyone saying like “Yo nice hit or can’t wait to see you after the game” and you meet up and you have pizza and it’s a lot of fun.  So that’s kind of the fun part about competing at least with rugby.  But I also just really like to be competitive and trying my best.”

Do you have a pre -competition routine?

Personally, before a game, my pregame routine is bumpin’ “Broadway” in my car and I sing as loud as I can and I scream it out, and then once we get there, we warm up, and then we have a cheer called kemosabe.  And that’s my favorite part is kemosabe.”

What will you miss most about being on the GVSU Women’s Rugby Team?

“I’ve been on the team for about five years and seeing the talent that comes and goes which is crazy because most of the people who join the team don’t even know how to play rugby and then by the end of their four years, they’re able to play a full game of rugby.  I think that’s going to be what I’m going to miss the most is just seeing people coming in and out and learning the game as they go.”