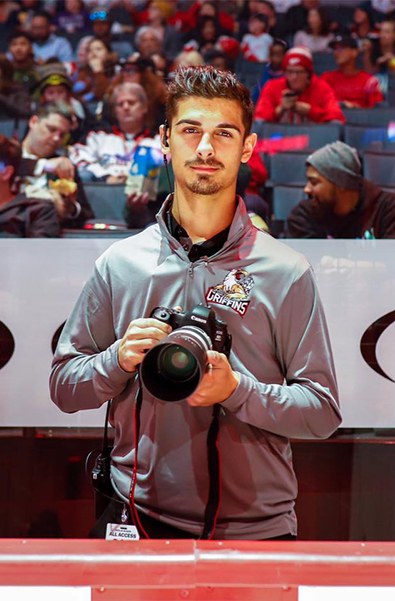 Dominic Stankiewicz is a junior here at GVSU from Dearborn Heights, Michigan.  Dominic is studying film and photography and plays for the Club Roller Hockey team as a goalie.  He is also a part of another club, the Club Ice Hockey team.

What do you enjoy most about the Roller Hockey Club?

“I enjoy the tight-knit community that we have for being such a small team.”

What is the best part about competing?

“The best part about playing in the competition that we play. We play a ton of big-name schools such as Michigan State, Ohio State, Michigan Tech.  They’re all pretty good teams so beating them and moving on to national championships is probably the best part about competing in our league and club.”

Do you have a pre-competition routine?

“Usually before a competition or a game I’m eating pasta.  It’s always the pregame meal and then once I get to the rink, we’re usually working out as a team stretching, doing hand warm-ups. Just to stay warm before the game.”

What is your proudest moment in being a part of the Roller Hockey team?

“The proudest moment of my first season was beating Michigan State division one.  We were the underdogs going into both games, actually, when we played them we ended up coming out on top.  So overall it was a great win for the team.”