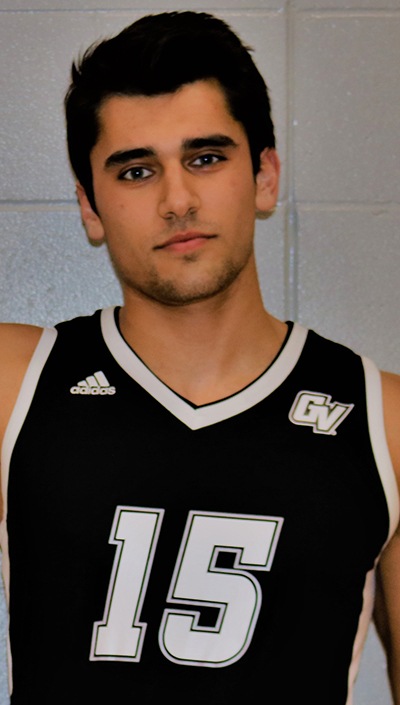 Justin Helou is currently a senior majoring in marketing with a minor in theater. Justin embodies everything that any student, athlete, and student-athlete should strive to be. He is a well-rounded, kind-hearted, and talented person and leader. He is patient and kind to everyone around him, always making the best of every situation. He is one of the Men’s Volleyball captains as well as part of the club e-board. Justin manages the club’s social media presence while regularly appearing in theater productions on Grand Valley’s campus. He plays the piano, guitar, and ukulele. You can find Justin in the Rec Center just about every day working out, training for boxing, or playing volleyball. He balances all the things he does with school, family, and friends. Organization is a key factor for anyone with a busy life and Justin manages everything well, and always does the best job he can possibly do in everything he does.

Justin is a major part of the club volleyball team. As a member of the e-board, a team captain, and a player who sees regular playing time, other players look up to him. Younger players are not afraid to talk to him and ask questions to learn. He is a leader on and off the court, always showing everyone the respect and kindness, they deserve. He carries himself extremely well in and outside of the gym. Justin shows what it truly means to be a Laker for a Lifetime in everything he does, and his presence is well accepted and loved by anyone who knows him.

How did you get involved with Men’s Volleyball Club?

Justin got involved with men’s volleyball when he came to GVSU as a freshman and he saw a couple of people playing in the Rec Center. One of the club members asked him and his friend to hop in and play with them, and it just spiraled from there.

What is your favorite memory of being on the Men’s Volleyball Club?

Attending tournaments, traveling the country, and playing in the national tournament are among Justin’s favorite memories on the club.

How are you involved with GVSU outside of the Men’s Volleyball Club?

Outside of men’s volleyball, Justin is involved in the theater where he has performed in various plays on campus. Justin is also in a theater honors fraternity and a member of the business college.

Justin plans to be a Laker for a Lifetime by continually using what he learned from Grand Valley and applying it to the rest of his life. As Justin leaves Grand Valley and encounters new challenges he plans to take what he has soaked up from men’s volleyball and Grand Valley to keep moving forward.