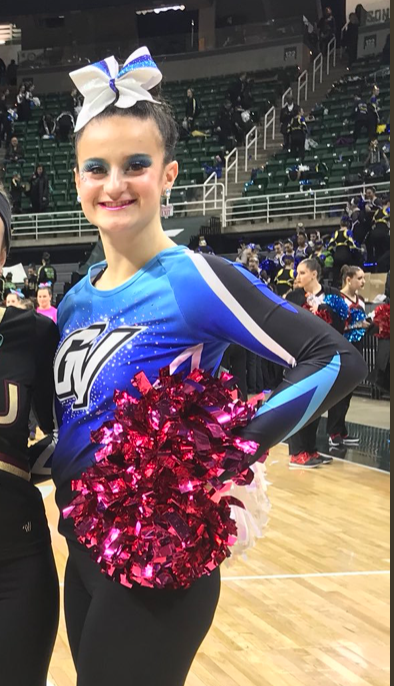 Sierra Starr is currently a sophomore studying exercise science. She is incredibly focused as well as fiercely determined. She leads by example, holding herself accountable in her schoolwork, athletics, and her dedication to everything she does; especially concerning her team. Beyond that, she is a genuine role model for all of her peers. She is respectful to all, even during disagreements, and she never asks anything of her teammates that she isn’t willing to do herself. In addition, her creative mind and commitment to pursuing originality in pompon have played a large part in choreographing some of the best routines GVSU Pompon has performed to date. She is undeniably talented, an ideal teammate, and a joy to coach. Above all, she is humble and never loses sight of her intentions and goals. Her persistence never ceases. She embodies everything that GVSU stands for, and everything that GVSU Pompon represents.

Sierra spends countless hours with her coach and co-captain choreographing competition routines for the team. This is a long, creative process that requires focus, organization, creativity, and above all, dedication to the cause. Sierra never misses an opportunity to participate and never hesitates to try new things asked of her. Choreographing is practice outside of practice, and a single routine requires over 100 hours of trials. Additionally, Sierra is in charge of the majority of fundraising efforts. Outside of GVSU Pompon, Sierra is very studious and involved in multiple study groups and academic organizations around campus.

How did you get involved with the Pompon Club?

Sierra got involved with pompon while in the sixth grade.

What is your favorite memory of being on Pompon Club?

Sierra’s favorite memory of being on GVSU Pompon is actually from this year at their High Kick competition. The club placed third in the state and boosted their scores from the previous season.

How are you involved with GVSU outside of Pompon Club?

Outside of GVSU Pompon, Sierra is a member of the Exercise Science Club, GVSU’s Alternative Breaks, and volunteers when she has the time.

Sierra plans on being a Laker for a Lifetime by impacting people both outside and inside of the GVSU community. Sierra hopes to implement this after graduation through pompon and her career due to meeting so many great people through pompon and GVSU.