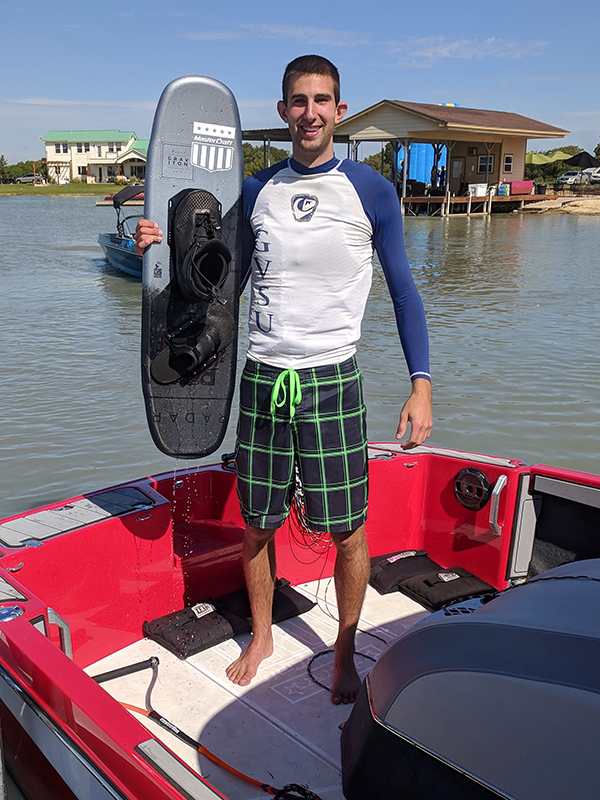 Andrew Olesak is a senior studying computer science at Grand Valley State University. During his time at GVSU Andy has participated with the Water Ski & Wakeboard Club where he demonstrated leadership both on and off the water. For the past two years, Andy has served on the executive board for the Water Ski & Wakeboard Club where he has played a big role in improving the club. Between his dedication to waterskiing, helping to coach new members, and keeping the team on track he has shown his commitment to the team and shown he will truly be a Laker for a Lifetime. Much of Andy’s time is spent getting involved with new aspects of the club to help make things easier for the other executive members.

A large portion of Andy’s role on the executive board has been providing boat and equipment maintenance. This has been a crucial role to help keep the club afloat and thriving. In addition to providing routine oil changes and other necessary jobs, Andy has built a portable slalom course for the team which is going to end up being a major advantage when it comes to competition. Outside of the team, Andy has built strong relationships with members of the community outside of GVSU and waterskiing helping to spread the awareness of the club. Before graduating Andy has already begun to plan how he will help the team in the future.

How did you get involved with the Water Ski & Wakeboard Club?

“I saw a slalom ski on a table at Campus Life Night, and thought you know I always used to ski as a kid so why not? From there on it’s all just been good memories.”

What is your favorite memory of being on the Water Ski & Wakeboard Club?

“One of my best is when we decided to do Thanksgiving together as a team and called it Skigiving. Everybody brought a dish and it was something we got to do outside of the sport, just a great bonding experience.

How are you involved with GVSU outside of the Water Ski & Wakeboard Club?

“I’m in Honors College and I also enjoy doing a lot of alumni reach out, so anybody that has skied for Grand Valley, I like to just keep in touch.”

“I hope to one day be a coach for GVSU Water Ski & Wakeboard, it seems a lot of alumni would like that spot and it would just be great to help the team out with boat maintenance. It’d be a great way to give back.”