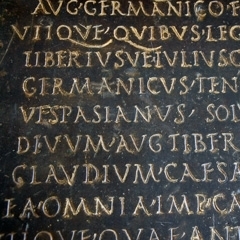 Kristen Rewa (née Heise) is a 2006 GVSU Honors graduate with a double major in Greek and Latin. She attended the Intercollegiate Center for Classical Studies in Rome, administered by Duke University, on a full scholarship from the Center during Fall semester 2004. She completed her legal studies at the University of Michigan School of Law in 2009 and is an Assistant City Attorney for Grand Rapids, Michigan.

Was your work in Classics a good preparation for law school?

I am very amused at the similarity between how I prep for my law school classes and how I prepared for my Greek and Latin classes.

A typical study session is as follows: I sit down with my case book in my lap - that's the "real life" law text. That by itself makes no sense to me whatsoever. So I bring out the ammunition quite familiar to the classical philologist. To my left is my Black's Law Dictionary to look up words that I thought I knew the meaning to, but later find out I was wrong (and just like Greek, I need to look up the terms again, and again and again...).

At my feet lies my "Explanations and Examples" for that subject. My legal "Allen and Greenough" [a standard Latin grammar], it tells me the rule I should have already known before I read the case and all the exceptions to it (as this case's application of that rule is almost certainly a deviation from the paradigm). Finally, sitting directly in front of me is my computer, where I take the notes needed to help me though the questions I will "volunteer" for in class.

It's pretty much the same old stuff.

How are you and your fellow students handling the challenges of law school? Has it been intimidating?

I do seriously think I am at an advantage over my colleagues in having a Greek/Latin education (and not just because I can rattle off legal Latin lingo). The type of thinking that legal professors are trying to cultivate, I've already been doing for many years.

The L1 [first year law] class has been warned to change its undergraduate study habits of rote memorization; it does not work for law. I did not and could not have studied that way in college. The analytical thinking law professors want to instill in students is the same type of thinking I need to read Greek and Latin.

Do you have any advice for those who are considering graduate and professional school?

The "study habit" that has proven invaluable to me in both Classics and now in law, is that one thing all the professors say and all the students hate to hear. After class, but before I began my next assignment, I would go back and re-read what we had covered in class. It made test preparation so much easier. I only wish I had gotten in the habit of doing that before my senior year. That cumulative type of preparation will definitely help me with the "do or die" exams at the end of the semester.

What about the exams and the workload? How are you holding up?

I hear a lot of my friends talk about how overwhelmed they are with the amount of meticulous reading required to read and discuss a three page case for class, yet I'm used to doing the two hour prep for every one hour of class and being prepared to spend 20 minutes of discussion on one clause or word therein.

Some students are so worried because they leave class more confused than when they entered. I am certainly confused after many classes, but not worried.

Actually, last weekend I began to worry about my lack of worry. Why aren't I worried? Maybe I don't "get it." Maybe I need to study more.

Then it dawned on me: no amount of contradictory sub-rules to any clause in the Federal Rules of Civil Procedure can befuddle my mind the way Greek 101 did. Sorry law school, an exam in Homeric Greek will always serve as the standard of dread.