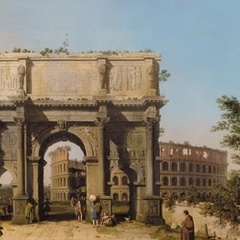 In the nineteenth century it was standard for young aristocrats to carry out what was called a "grand tour." Winding through the Alps on country roads, paying cicerones to show you a chapel or landmark, and visiting the Renaissance cities of Northern Italy were all part of the journey. No grand tour was complete without a visit to the city: Rome.

For the better part of European history an understanding of the ancient Greco-Roman world has been the cornerstone of knowledge, culture, and power. It was expected that young aristocrats be trained in Greek and Latin, as well as history, philosophy, art, and architecture. A visit to Rome was a key part of a classical education, giving a physical context to the study of history. Because higher education and travel were expensive, this intellectual and cultural advantage was held almost exclusively by aristocrats.

The world has gone through substantial change since the European grand tours of the nineteenth century, but an understanding of the Greco-Roman world continues to be invaluable in understanding Western thought and politics. Because of my interest in language, culture, and history and how these relate to political power, I became a Classics major. In Allendale I was able to read Plato in Greek, but there was a key component of my classical education missing; I needed a grand tour.

Far from being an aristocratic European, I grew up outside of Flint, MI, as the son of a high school teacher and a musician. I lacked the family resources to pay for a trip to Rome (let alone for all those cicerones!) and experienced the same socio-economic disadvantages that made sure only aristocrats knew what the Sistine Chapel smelled like.

These experiences at first glance may seem trivial, but it is their rarity and their universality which make them so wonderful and so powerful. An experience of Rome is something which unites you with the people who have been there before, it gives the ghosts of history a physical context. To see the spot where Julius Caesar died, to know that it was at the statue of Pompey, who was his greatest enemy and dear friend, was a profound moment for me.

The shared experience of Rome brings you into a community which extends all the way back to ancient Rome. The people who lived and wrote in Rome, and those who have been influenced by them have been many of the most important figures of all human history. It was in order to partake in this community that I went to Rome last fall and partook in the Intercollegiate Center for Classical Studies in Rome, one of the most prestigious study abroad programs for classical studies in the world.

The fact that I was able to learn Latin and Greek, and what’s more go to Rome, is a testament to American democracy and the outstanding intellectual possibilities offered by Grand Valley State University. Not only did Grand Valley prepare me academically for this incredibly challenging program, it also helped me get the funding to participate through the Padnos International Center and the Office of Fellowships.

While studying in Rome I learned more than I imagined possible. I read Thucydides’ Histories, and when I read about the invasion of Sicily I knew exactly what the topography was like. I had stood on the ruins of the fortifications, seen the quarry where they kept Athenian prisoners of war, and smelled the ocean spray of the great harbor where the Athenian expedition, and with it the Athenian empire, met its tragic end.

All these experiences have had a profound impact on who I am and how I see myself as a world citizen. These opportunities were once reserved for European aristocrats, but thanks to the academic quality of Grand Valley, and generous funding from various donors, a public servant’s son from Michigan was able to study the classical languages in Rome. It is a testament to Grand Valley that I was able to have my own grand tour.

Reprinted from Global Connections, the newsletter of the Padnos International Center.