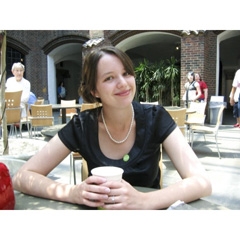 Alumnus Renee Mayes first came to Grand Valley State University because it was a “comfortable place to be.” She stayed to learn the classics, and she left to become one.

One year later, Mayes has made a life for herself teaching in Ann Arbor Public Schools.

“Her decision to return to Michigan is a real vote of confidence in the future of the state,” said Charles Pazdernik, chair of GVSU’s classic department. “She’s a great example of a GVSU student who found her intellectual and vocational passion, who followed that passion and challenged herself in a rigorous program of study during her time here, and ended up having these opportunities and making these choices.”

Joining the classics program, Mayes said, shaped her from being simply an “older kid” to what she describes as a “fully fledged responsible adult.”

“Wrapping your mind around a difficult Latin passage is like forcing your brain to run an agility relay,” she said. “It trains you to contemplate multiple possibilities and consider all your options. Learning to think in this way is valuable no matter what you do in life.”

Shortly after receiving her diploma, Mayes filled out more than 20 applications and received five interviews and three offers across the country. After a year as a teacher in Virginia, Mayes moved back to Michigan to be with her fiancé when a teaching position in Ann Arbor Public Schools opened up.

“I wasn’t sure that it was wise to give up full-time work out-of-state for part-time work in state,” Mayes said. “This job, however, was meant to be.”

A week into the school year, Mayes was promoted to full-time by replacing a well-known and “much loved” teacher.

“Latin programs generally live or die by the teacher in charge of them,” she said. “I am committed to keeping this program strong.”

The old economic rule of supply and demand worked in Mayes’ favor, she said. Comparatively, there are few Latin teachers to Latin positions, though higher education, she maintained, was the cardinal force behind her hire.

“I really love teaching, and I’m lucky that I found a career with which I click so nicely,” she said. “I love Latin and I love sharing Latin with students … When they suddenly get a concept, I am as thrilled as when I first had the same light bulb moment.”