“Staying in Place” order will be in effect for GVSU students living in Allendale Township from September 17 through October 1. Read more Complete your daily online self-assessment. 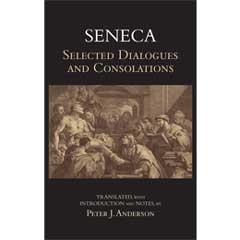 Seneca's dialogues—as his epistolary essays have traditionally been known—offer an ideal path into the philosophical thought of first-century Rome's most famous Stoic, whose compelled suicide in 65 CE (by order of his former pupil Emperor Nero) drew comparisons to the death of Socrates.

Notable for, among other things, their portrait of a providential universe and defense of the life of virtue, the nine dialogues included in this volume illustrate the deeply intertwined cosmological and moral arguments of ancient Rome’s chief philosophical alternative to Epicureanism and Academic Skepticism.

Peter J. Anderson's new translation conveys the distinctive character of Seneca's style, while striving for accuracy and consistency in its renderings of key terms. His Introduction discusses the dialogues as works of art and situates them in the context of ancient Stoic philosophy as well as the wider philosophical scene. Notes and a glossary are also included.