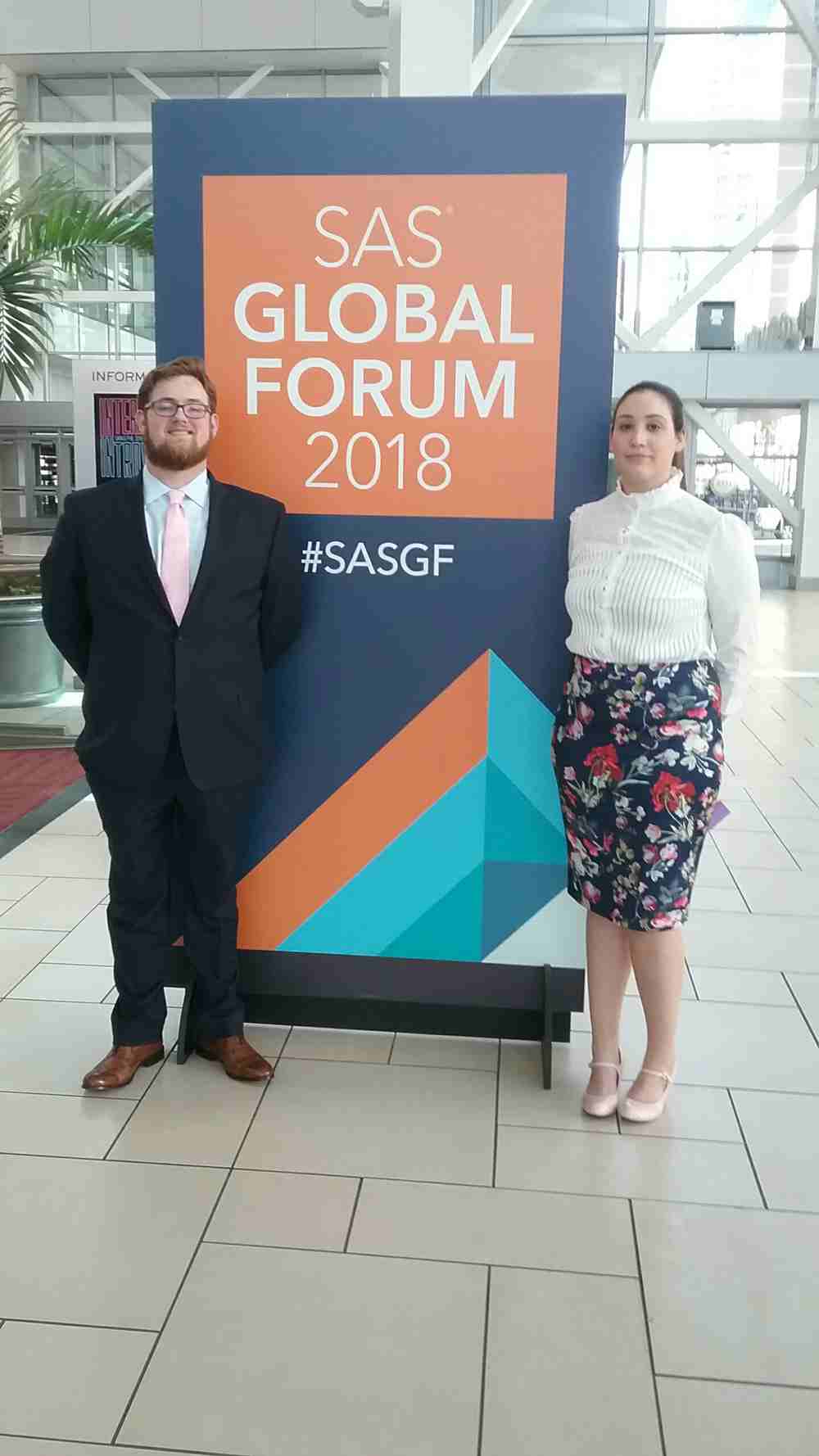 A team of two biostatistics graduate students placed in the top three spots of an international analytics competition held during the SAS Global Forum in April.

Kayla Hawkins and Joe Lorenz were one of eight student teams who were selected as finalists in the competition out of a pool of 60 teams. Grand Valley’s team placed second overall and the award was announced at a conference session in front of an audience of approximately 4,000 people.

Hawkins and Lorenz were challenged to find a public data set and write a Statistical Analysis System (SAS)-based analytics paper on the data for the competition, which is referred to as the Student Symposium.

Under the mentorship of Robert Downer, professor of biostatistics and master’s program director, the duo analyzed data representing why more than 110,000 medical appointments in Brazil were missed by patients, without cancellation, over a three-month period. The data, which was provided by Kaggle Inc., included patient appointment scheduling information, demographic variables and showcased whether an individual patient was a “no-show” for an appointment.

Based on the results of the analysis, Hawkins and Lorenz found that variables impacting the probability of a no-show included chronic illnesses, age of the patient, lack of reminders or whether or not the appointment was scheduled on the same day as it occurred.

“The most impactful snapshot that I gained from the data was that people suffering with lifelong chronic illnesses, like diabetes or alcoholism, were actually at greater risk of no-showing, which means that these people who probably are in the greatest need of medical care are not getting it,” said Lorenz, from Grass Lake.

Both Lorenz and Hawkins hope that their research outlined in their paper, "Getting to Know the No-Show: Predictive Modeling of Missing a Medical Appointment," will shine light on an overlooked issue.

“Drawing more attention to the negative effects that no-show appointments have and looking for remedies would be the most positive impact from our research,” said Hawkins, from St. Helen.

A key takeaway from the competition for Hawkins was gaining additional experience in translating complex statistical information for a general audience.

“It helped us realize that sometimes simplicity is better and can have a more meaningful impact than trying to explain everything where important aspects can become muddled,” said Hawkins.

Hawkins and Lorenz were the first students from Grand Valley to compete at the SAS Global Forum since the competition began in 2016.


Page last modified April 26, 2018
Report a problem with this page