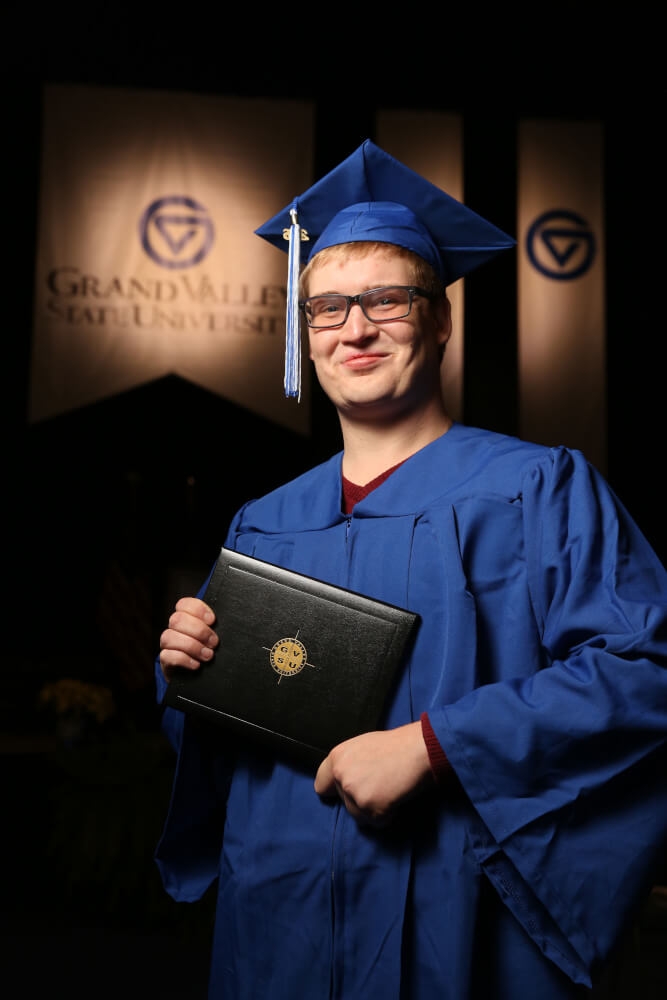 Nine years ago, a doctor told Bryce Gould that he would never be able to attend college after he suffered extensive physical and mental injuries in a car accident.

Gould proved that doctor wrong when he walked across the commencement stage on December 10 at Van Andel Arena in Grand Rapids, shook President Thomas J. Haas' hand and accepted his bachelor's degree in sociology.

"Commencement was a surreal experience for me and I was ecstatic to finally graduate after the long road I have taken in my life," said Gould, a native of Byron Center.

The accident happened November 3, 2007, when Gould was a junior in high school.

Gould and two of his friends were leaving a Byron Center neighborhood when the driver's side of the car he was driving was T-boned by a Ford F-350. This pushed the car into oncoming traffic where the driver's side was struck again.

"I didn't have time to process what was happening because I was unconscious on the first impact," said Gould.

Gould's mother, Sarah VanOeveren, said her son was trapped in the car for about an hour and the Jaws of Life had to be used to remove him and his two friends from the vehicle.

"Police officers told us they have no idea how Bryce survived," VanOeveren recalled. "The car basically looked like it was cut in half. There was nothing left, and he had to be intubated while he was stuck in the car."

About two weeks later, Gould awoke in a hospital bed after being in a coma; his mother was by his side.

"Coming out of a coma isn't like what they show in the movies — it happens in stages," Gould explained. "One month and three days after my accident is the first memory I have, and it was a conversation I had with my mom."

The accident left Gould with some memory loss and multiple external and internal injuries. Gould broke his femur and tibia/fibula in his left leg, and almost completely tore two tendons in one of his hands. He also continues to have issues with his working and short-term memory.

Memory loss, however, wasn't Gould's biggest obstacle after the accident.

"With a brain injury, you have to re-learn how to do everything," Gould said. "I was learning how to walk, talk and swallow again, and how to dress myself with only one hand. I was re-learning all of these small things that we take for granted in our everyday lives."

Gould re-learned these "small things" during six months of rehabilitation — the first month was spent at Mary Free Bed doing occupational, physical and speech therapy. Around Christmas Eve of 2007, Gould was released, but still went through six months of out-patient rehabilitation.

After graduating from high school in 2009 and attempting to attend an out-of-state college, Gould came back to Michigan and began attending Grand Valley in 2010.

Through his time living with a disability, Gould has become an advocate for disability education, which is why he chose sociology as his major.

"I feel that a lot of the misunderstanding, and in some cases fear, of people with disabilities comes from people not understanding what it actually means to be disabled," Gould said. "Sociologists are constantly seeking to gain more understanding about people who have the disabilities, rather than the medical model where the person sort of becomes the disability. The latter is the perspective I want to work to change."

While Gould said there were many struggles and challenges throughout his rehabilitation, and throughout his life since the accident, the experience gave him a sense of purpose. Gould wants his Laker Effect to be helping other people who are going through similar situations.

"It says something to someone going through this kind of experience when the person they're talking to has some sort of tie to it as well," said Gould. "I won't just have sympathy for those individuals, but also an empathy and understanding. I can look at them and say, 'I've been there before.'"

Now that Gould has defied the odds and graduated from Grand Valley, he will work for IKUS Life Enrichment Services — an organization that helps individuals with disabilities discover their potential, experience greater freedom and learn new skills.

Specifically, Gould will help facilitate the skill-building program at Indian Trails Camp in Grand Rapids. Through this program, Gould will help people with disabilities, or recovering from injuries, build the necessary skills to work and live.

Gould's life journey up to this point also inspired VanOeveren to reconsider her career path. At the time of the accident, VanOeveren was in the final stages of completing her bachelor's degree in business. When her son was released from the hospital, she enrolled at Grand Valley to study neuroscience.

"Bryce will be a great counselor because he will have that personal connection with people with disabilities, but I can't do what he does. What I can do is help progress the neurological piece." said VanOeveren, who received her bachelor's and master's degrees in cell and molecular biology in 2014 and 2016, respectively.

VanOeveren currently works as a research lab manager in the College of Human Medicine at Michigan State University in Grand Rapids. There, she is currently working to establish a lab that will study Parkinson's disease and other neurodegenerative diseases.

In the future, Gould hopes to earn a master's degree in rehabilitation counseling and eventually a doctorate in sociology so he can be a counselor while also conducting his own research on disabilities and society and how the two interact.

For Gould, graduating from Grand Valley marked the conclusion of one journey, and the beginning of a new one.

"On graduation day, I was filled with excitement because I got through all of this," Gould said. "My accident gave me a purpose and a direction to focus on my passion for helping people."


Page last modified December 12, 2016
Report a problem with this page