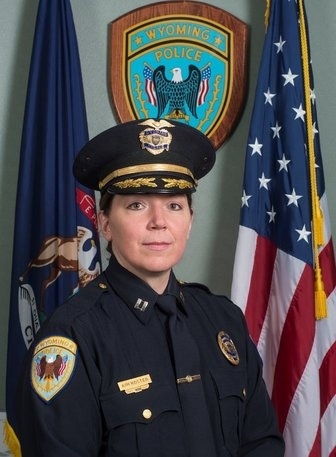 Throughout her career, Koster has been recognized with several commendations, including the Life Saving Award, Chief’s Award of Excellence, Outstanding Young Public Safety Officer and Safe Driving Award.

She served as a 911 communications supervisor, during which time she led the consolidation of police and fire operations in multiple communities, including Wyoming’s move to Kent County. She has also served as lead detective in homicide investigations and as a crisis negotiator, among other critical roles throughout her career.

With a commitment to training, she graduated with Class 251 of the FBI National Academy. She also attended the Leadership Institute training hosted by Grand Rapids Police Department and the Police and Staff Command training hosted by Northwestern University.

She resides in Grand Rapids with her wife, Marie, and three of her children, Bonham, Cash and Jett. She also has two adult stepchildren, Samantha and Alex.


Page last modified April 19, 2018
Report a problem with this page