Art in the Classroom

ArtPrize was organized to reboot the conversation between artists and audiences on a grand scale. At ArtPrize, any artist—from established to emerging—has the chance to show work. Any visitor can vote. The vote will determine who wins the largest art prize in the world. ArtPrize also took the unusual step to allow people in the city to open a venue and choose the artists to show in their space. There is not one official curator or jury for the competition. The number of venues is fluid, so the number of competing artists is fluid. The possibilities are wide open.

In keeping with Grand Valley’s long tradition of supporting the arts, the university provided two venues for ArtPrize, which ran from Sept. 23 through Oct. 10. Ten artists participated in the international ArtPrize competition at GVSU's two venues, the Meijer Public Broadcast Center and the DeVos Center Frey Foundation Courtyard.

Each of the artists were invited to participate in a panel discussion at Loosemore Auditorium, on September 27, from 1-3 p.m., in the DeVos Center, 401 W. Fulton, on the Pew Grand Rapids Campus. A reception followed, from 3-5 p.m. Both events were open to the public with free admission sponsored by Meijer, Inc.

Maggie Annerino, Ada MI, GVSU Adjunct
Airing DIRTY LAUNDRY was a tribute to the clothesline which became a vehicle for neighbor women of earlier generations to communicate. A new generation wears underwear as outerwear and uses social networking sites to air their DIRTY LAUNDRY. To view female undergarments in a public space on clotheslines pays tribute to the past, present, and future generations of women and explores how cultural norms and communication have changed. 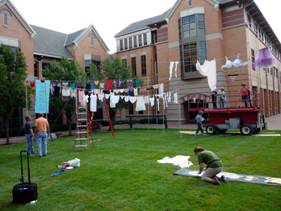 Andrew Tankersley, Dowagiac, MI, GVSU alum
This work was a result of Andrew Tankersley's desire to create an object or objects of considerable mass while confined to high-fired ceramic as a material and a time limit of three months. 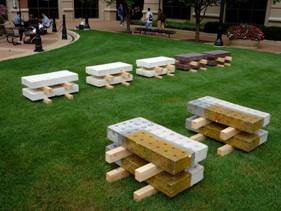 This piece was installed the first day of ArtPrize, and was documented thereafter until the conclusion of ArtPrize. The pieces were interactive and sculptural and became more about the process of collaborating than the actual physical outcome. 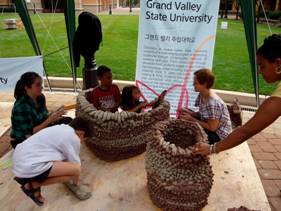 Julie Upmeyer, Tepebasi, Istanbul, GVSU alumna
The purpose of campaigning is to spread ideas and gather support, not so different from the purpose of an artwork, whether in the context of an exhibition, a museum or within the ArtPrize competition. During any election, cities are filled with what could appear as city-wide public art installations; banners, stickers, flags, billboards. 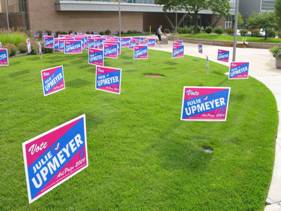 Fritz Olsen, Sawyer, MI
The "Great Lakes Bench" by sculptor Fritz Olsen is created of a single block of granite which explores a variety of textural surfaces. These include smoothly polished, softly honed, and rough hewn finishes. This sculpture invites the viewer to participate not only through its visual, tactile, and sensual aspects, but it also serves as a functional work of art providing comfortable seating. 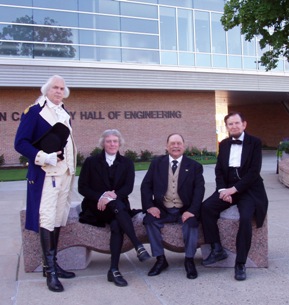 Deanna Morse, Grand Rapids, MI, GVSU Faculty
Deanna Morse's recent video work examines nature through the lens of time. This may help people look at the real world with a new appreciation, and may help us tread more carefully, more respectfully, in the natural world. 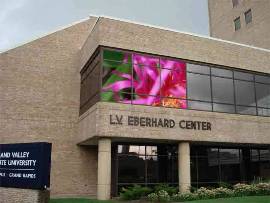 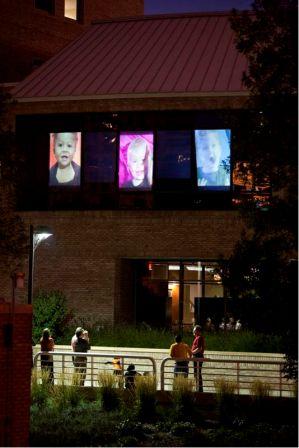 John Schwarz, Chelsea, MI http://www.chelsearivergallery.com/projects/john-schwarz/
John Schwarz's soft tail goose is constructed from 90% recycled materials including motorcycle, car, and bicycle parts. Cross country and down hill skis are also attached for wing and tail feathers. Where possible the colors of the parts remain the same as found. New rivets and bolts were used to hold it together. The beauty of using recycled material is found and recycled parts are fairly inexpensive and building sculptures with discarded parts keeps things from entering land fills. 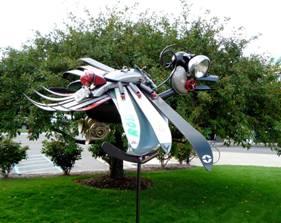 Other Artists who were NOT our official entries, but had work on our sites:

Eames Demetrios - Santa Monica, CA https://www.artprize.org/eames-demetrios/2012/along-the-lekksenne-lekcenne-kcymaerxthaereal-grand-rapids
Formally showed at Kendall College of Art and Design for ArtPrize, Eames Demetrios made a gift to GVSU of a plaque titled "Waiting for the Grwost" and installed it at the Front Street Plaza, Meijer Public Broadcast Center Venue. It was one of five plaques installed in the City of Grand Rapids. 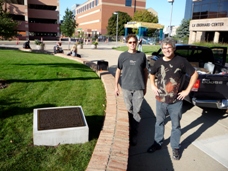 Kurt Perschke, New York, NY   www.redballproject.com/
The RedBall Project was venued through UICA but was installed in a different location in the City of Grand Rapids each day of ArtPrize. The RedBall Project came to GVSU on September 29 and was installed partially under the west arch (of the 3 arches) in front of the entrance to Loosemore Auditorium in the Frey Foundation Courtyard. 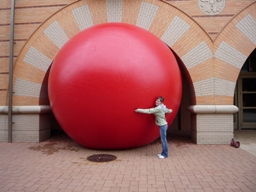 Page last modified September 15, 2017
Report a problem with this page