All artworks on display at LHH in the Art Collection Database

Before and after renovation video of Lake Huron Hall, courtesy of University Communications. 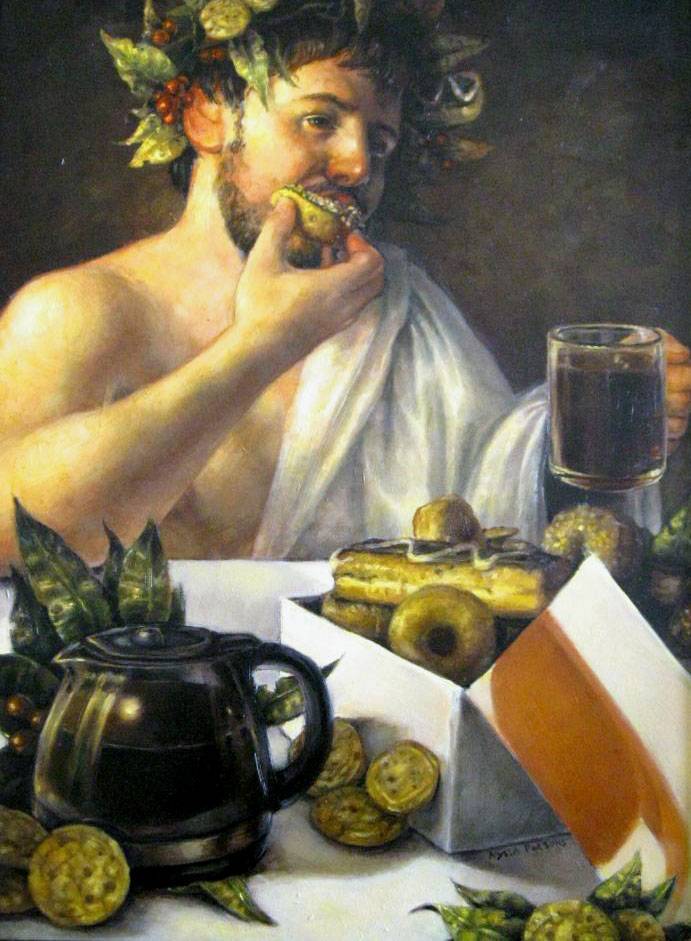 Alyssa Parsons studied illustration and painting at Kendall College of Art and Design of Ferris State University. She works largely with portraiture and book illustration, including recent work with children's books. If this image was a book cover, it would tell the story of a modern Bacchus, the Roman god of agriculture, wine and fertility--reimagined drinking coffee and eating donuts. 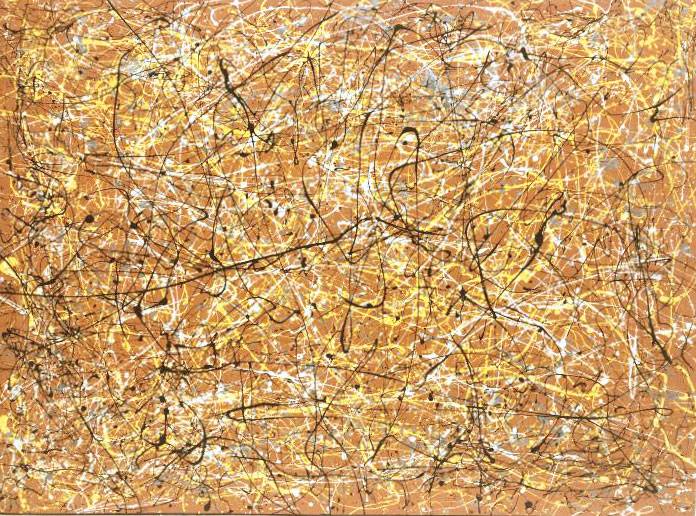 Brad Walworth creates abstract images that rely on bold color and texture to tell a story. For Brad, public art is a critical element of the environment and so he donated this work to GVSU because he believes, as do we, that our stories matter and that art matters. Art enriches our everyday lives. 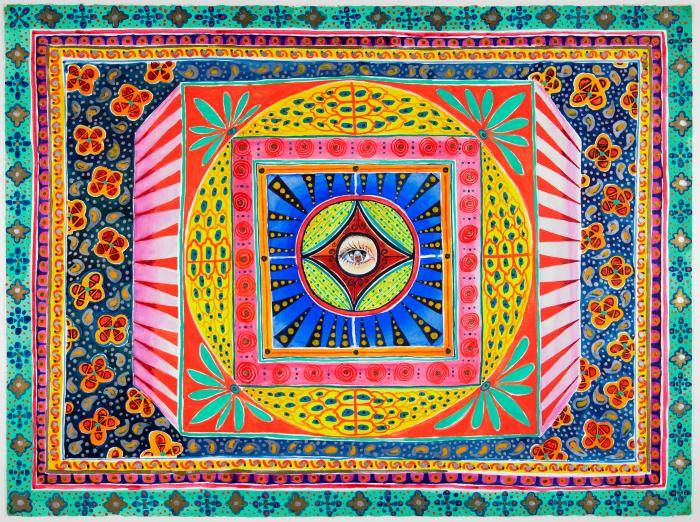 Originally a term for chambermaids living in sequestered quarters of female members of the Turkish court, the term odalisque was later used to refer to a harem, a slave, or a concubine in Renaissance France. From there the term evolved to indicate a specific reclined pose of the female body depicted in European art and literature. While the nude female form in art goes back to antiquity, the odalisque woman became a site for exotic fantasy and an object of male sexual gratification; the odalisque is alienated from her reality and identity, transformed into an object of desire, accessible by the male voyeur. This painting by Eleanor Van Haitsma asks the viewer to question what they are seeing. Whose eye is at the center of the painting, who is watching who, and what are they seeing?

Associate Professor of Art History, Sigrid Danielson, often uses this painting in her Middle Eastern Art course to drive conversation about the female body in art and the male gaze. 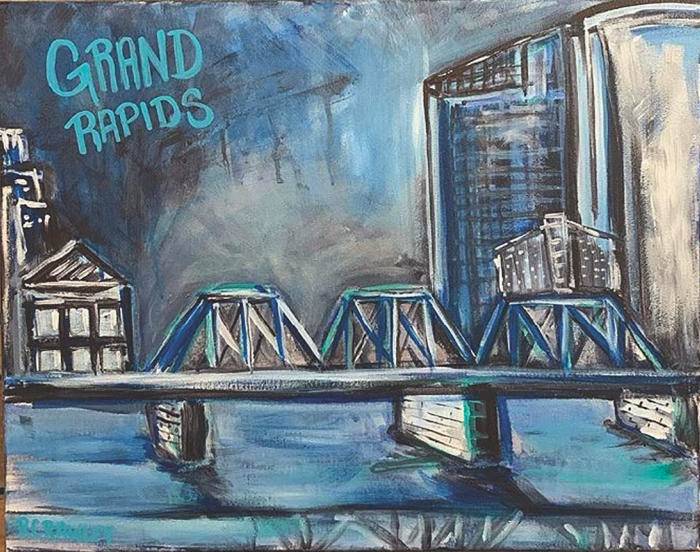 The GVSU Art Gallery actively collects works of art concerning social and racial justice. This painting, created by local artist Ryan Crawley, was purchased in August 2020, not long after peaceful protest in Grand Rapids turned destructive following the murder of George Floyd in Minneapolis. In May 2020, Ryan posted this painting on instagram with the comment, “I make this post with a heavy heart… While change is necessary, I only want progress, I feel everyone can get behind that.” 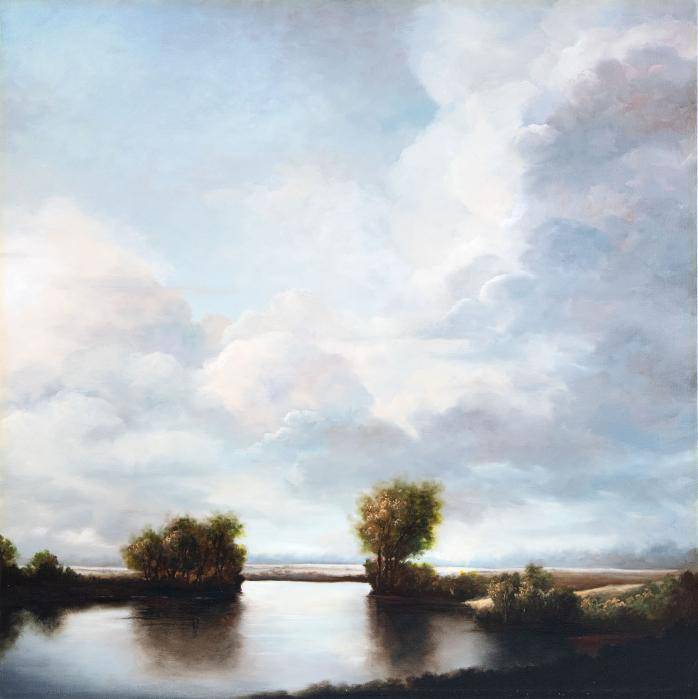 Each painting by Victoria Adams is a unique locale, enticing the viewer to linger and explore an intimate glimpse into a particular universe. While the places Adams paints do not exist in real life, they still feel real in their own way. Omitting any signs of human habitation, Adams reminds us to value the limited unspoiled wilderness around us. "I want the paintings to provide an interface between how a painting is experienced and how nature is experienced." - Victoria Adams 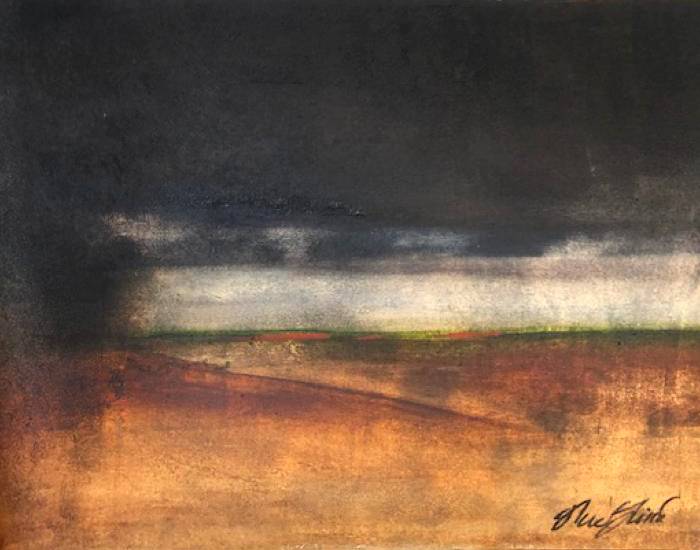 Nuel Friend is a local artist working and living in Grand Rapids. Nuel explains his art making process as influenced by everything he reads, sees, feels, and experiences and the resulting paintings are unique, inspiring, and have a push/pull relationship between the beautiful and strange.

These large scale linocut prints were purchased in 2019 from GVSU alum El Ronan during her Senior exhibition. The artist draws on themes of death, myth, and beauty emphasizing the intersection of the known and unknown. “The process of making is exploratory and devotional, with the end product becoming a relic of that search.” - El Ronan 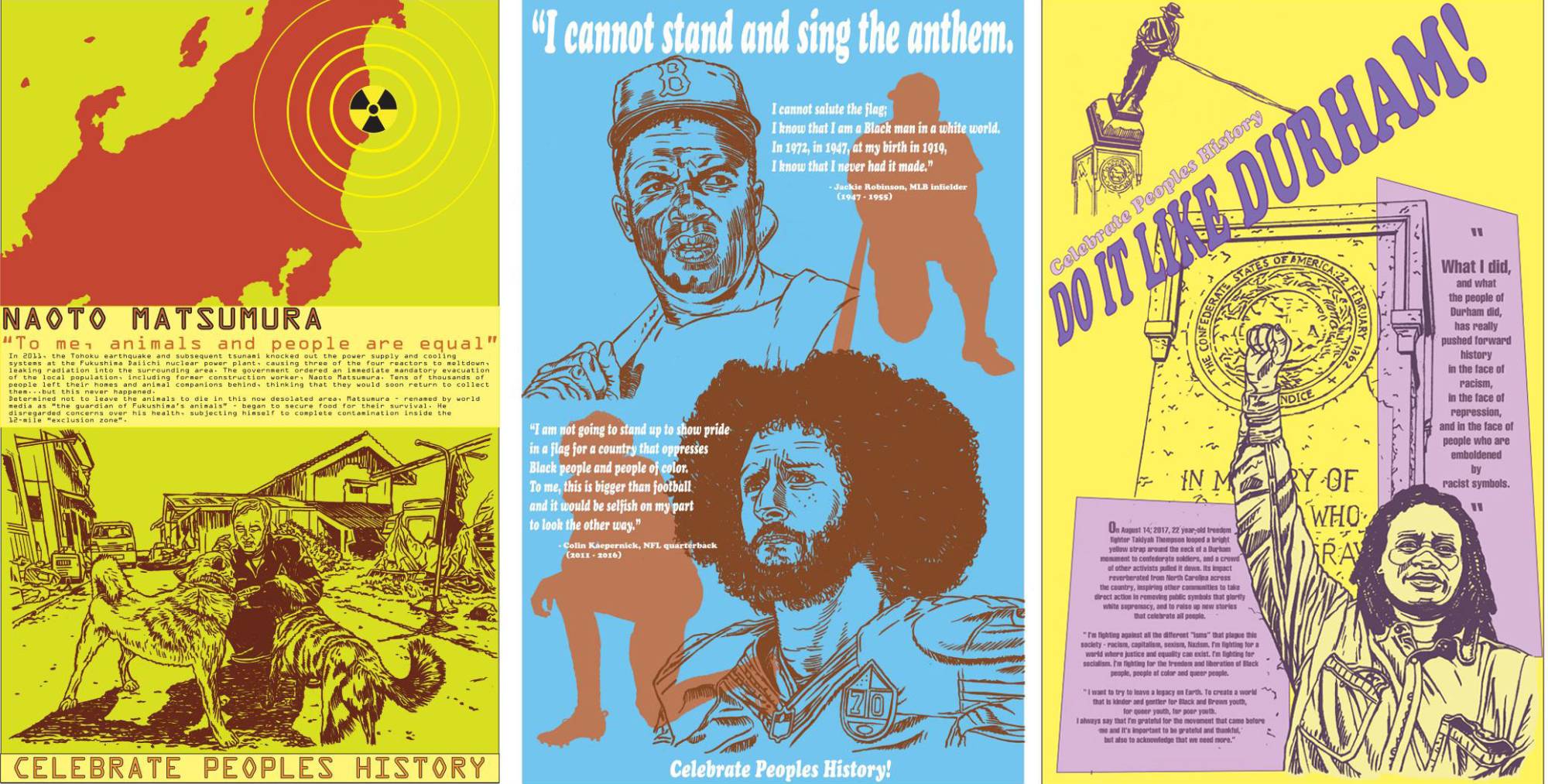 These pieces are part of a larger body of work in our collection titled Envisioning Freedom by Associate Professor of Visual & Media Arts Brett Colley. Using his design and printmaking skills, Brett recognizes his privilege as a white, cisgender, straight, male, and created this poster series to highlight the heroes in our society who fight against systems of oppression. 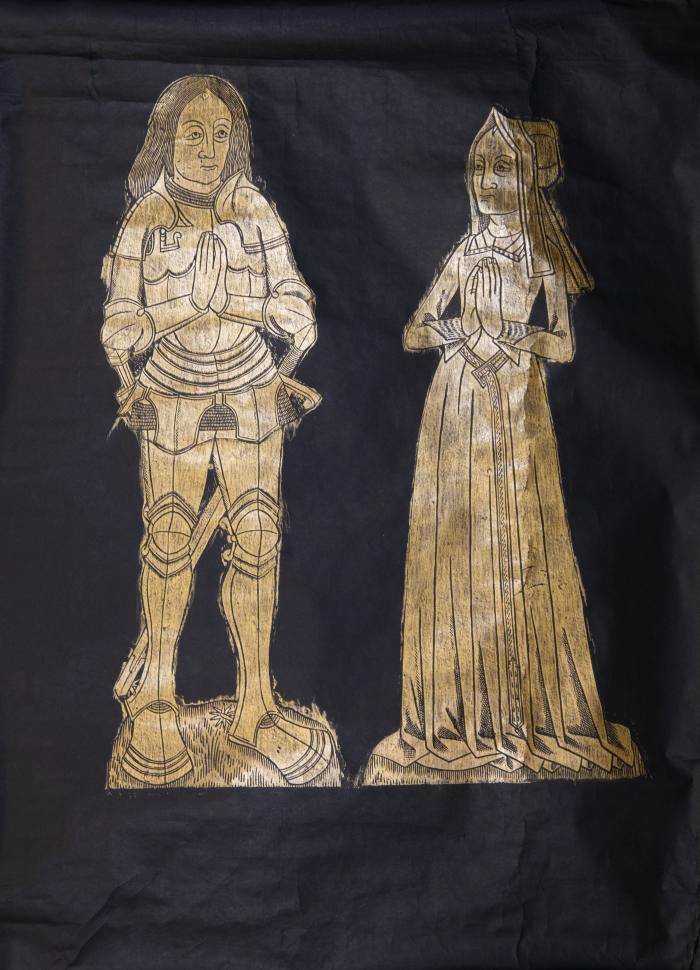 During the 1970s, Jane Ewing traveled across Europe documenting brass altar tombs by taking a rubbing with heelball, a mixture of hard wax and lampblack. These reproduction images allow researchers to better understand the symbolism behind the imagery on the tombs and how they represent the interned individuals. These two effigies from Fairford Church in Gloucestershire, England are of John Tame (1430-1500) and his wife Alice Twyniho (d. 1471). Tame was a wealthy wool producer who helped fund the stain glass windows that can still be found in the church today. 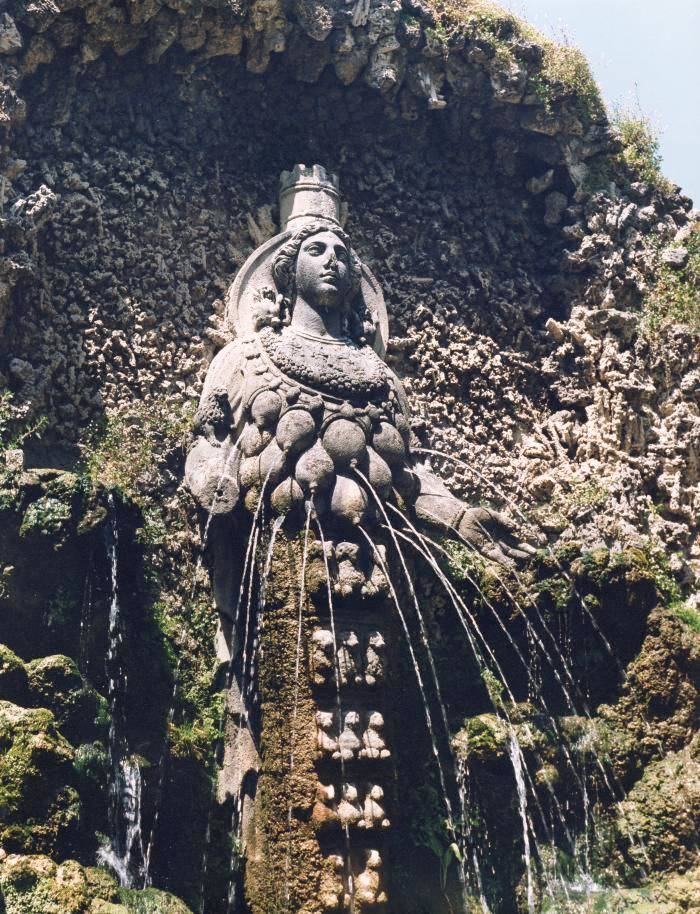 Photographer Claudia Liberatore made it her mission to document the world around her, whether that be hanging laundry, painting with her small children, or traveling the world. This photograph was taken while on a trip to Italy. This fountain, often called the Fountain of Fertility, is located in Villa d’Este, Tivoli. It represents an interpretation of Artemis, the “great mother goddess,” and the goddess of fertility in Ancient Greek mythology. The spherical objects on her chest, which are commonly assumed to be breasts, are more likely gourds which have been used as fertility symbols for centuries. The GVSU Art Collection includes many of Liberatore's works, see more here. 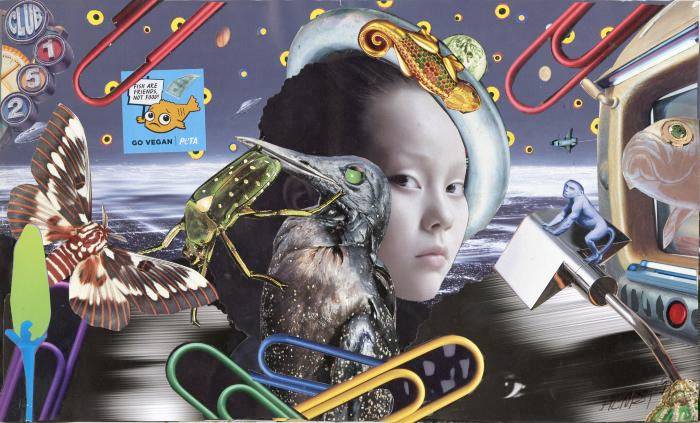 The GVSU Art Gallery actively collects works of art created by outsider artists, including this piece by Grand Rapids artist Henry Brown. Henry creates works of art that raise awareness of social issues like institutional racism, societal oppression, environmental issues, and corporate greed. His work is created through collage; finding the perfect images and skillfully piecing them together to critique issues like institutional racism, climate change, and the impact of corporate greed. .

In 2008, the GVSU Department of Visual and Media Arts and the Department of Classics collaborated to create a series of Ancient Greek bronze sculpture replicants. The Art and Design department led the students through the process of lost-wax casting; a method of metal casting, often silver, gold, brass, or in this case, bronze, in which the molten metal is poured into a mold that has been created using a wax model. The Classics department contributed information about how to accurately portray an Ancient Greek mythical figure. The bronze on the far left tells the story of Nike, the winged goddess of victory in both war and peaceful competition. The two bronzes on the right tell the story of Achilles, a hero of the Trojan War who became known as the greatest of all the Greek warriors.

The clay for these bottles came from the ravine that flows in and around the GVSU Allendale Campus. For artist Meghan Kelly the act of finding and working with local deposits of clay is part of her process. She states, “I believe in earth's natural cycles. My inspiration comes from exploring the relationship between the natural world and the man-made. Within the observable patterns of life and death I find truth and consistency. Even while cities grow and change, industries develop and climb, wars rage and destroy, I'm comforted by nature's steady heartbeat.”

The following examples describe the successful correlation between the GVSU art collection and curriculum. Each group of artworks offer students an opportunity to explore connections between ancient and modern ideas.

"Students in our classes have done many projects involving these very pieces over the years, but the objects have never been gathered together in the same place.  Now, thanks to the University Art Gallery, we’ll be able to discuss and compare these pieces so much more easily, as a real-time part of our class sessions." - Faculty Chair of Classics, Melissa Morrison

Excerpt from an assignment in an Intro to Ancient Art Course

Consider the following statement, from a past exhibition of Greek and Roman artifacts in the University Art Gallery. This exhibition explored “conversations” between modern and ancient artists and craftsmen:

“The artists and craftsmen of ancient Greece and Rome left behind more than a collection of fascinating objects. They also left behind a rich and imposing set of images and motifs, specific shapes and styles—an entire visual language that other groups have taken up and used as they saw fit. In many later cultures, the visual language of Greek and Roman architecture and art represented something their own work would adapt, transpose, change, and bend to their own purposes in their own times and places. Some would use the elements of classical objects as familiar reference points to establish a connection between themselves and the ancient world; others would reject it.”

For this project, you will study modern objects that participate in the “visual conversation” between ancient and modern artists, designers, architects, and consumers. What are some ways in which contemporary buildings, public art, and other objects here at Grand Valley – and in Grand Rapids – have become part of this “conversation” with ancient Greece and Rome? 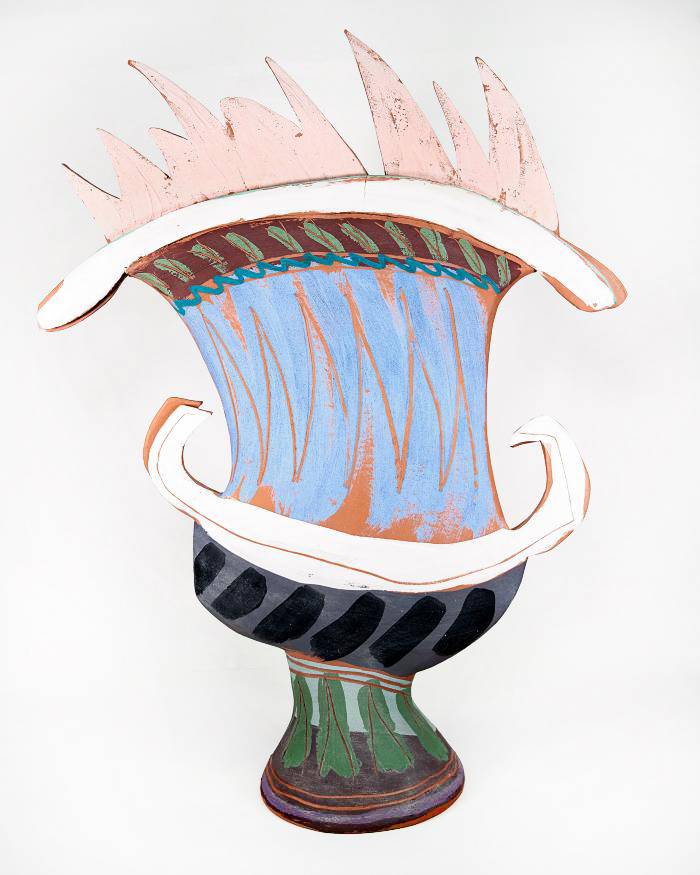 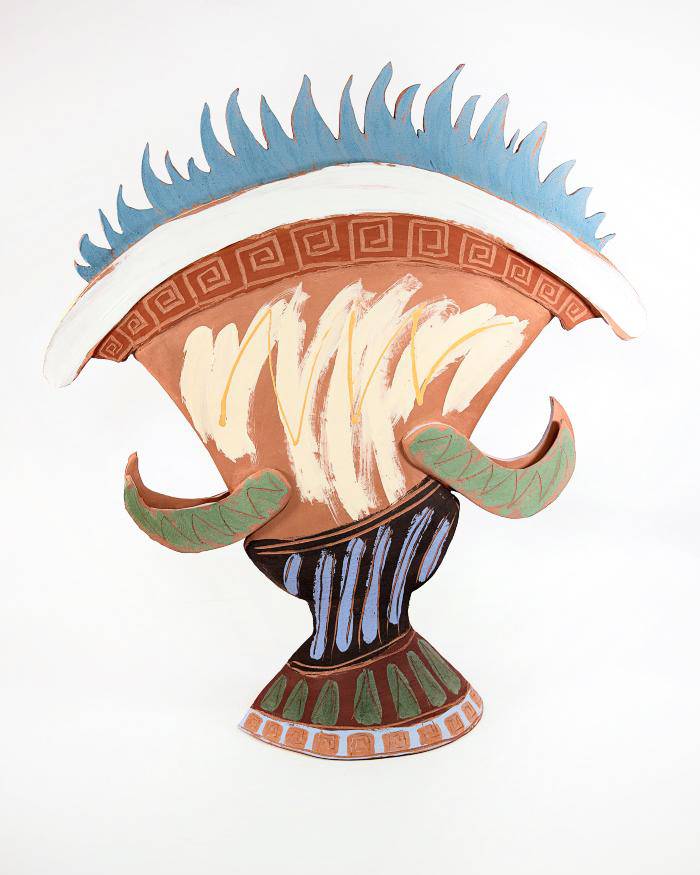 “Modern Myth, Postmodern Greek Vessels, and about a dozen others in the university collections, are frequently used by students for the project [described] above. These and other pieces now in Lake Huron Hall were also selected by students in four different iterations of our Classics Capstone [course] as objects in our University Art Collections that exemplify what it means to study Classics – that is, to actively engage with, adapt, and transpose elements of the past in service of bright new future." - Classics Faculty Chair Melissa Morrison 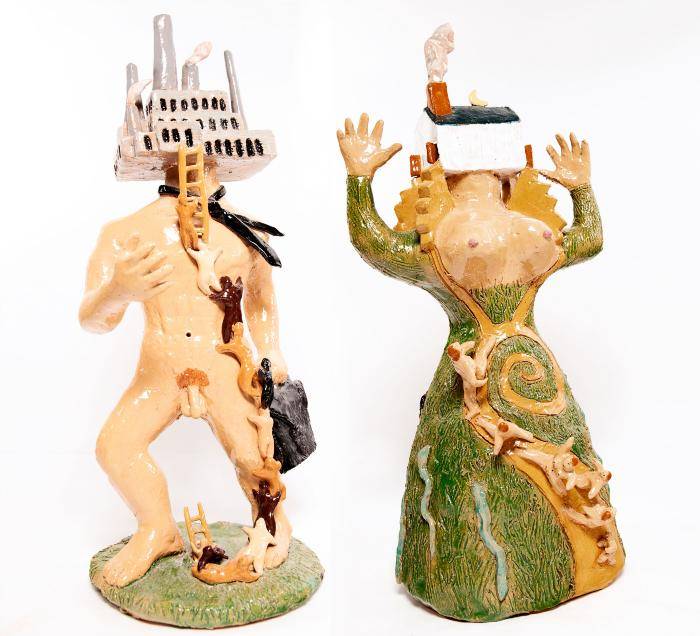 "Students love these pieces because they are so clearly and vividly “in conversation” with ancient objects.  Mrs. House directly references ancient Minoan (Bronze Age) priestess figurines, but with a modern twist, inviting viewers to consider how the social roles of women have – or haven’t – changed over time.  Mr. Work uses a later style of Greek art – a style used for depiction of mythological heroes – to engage us in consideration of the social roles of men.  As a pair, these figures challenge us to think about some tough current questions, using comparison of ancient and contemporary visual references as framework for discussion." - Faculty Chair of Classics Melissa Morrison

For assistance in integrating artwork into the classroom and your teaching curriculum,  please contact our UX/Learning Manager, Amanda Rainey; raineyam@gvsu.edu


Page last modified November 20, 2020
Report a problem with this page